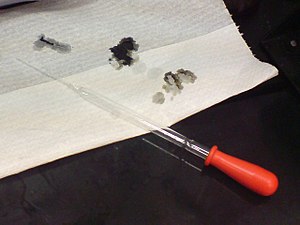 Sulfuric acid, also known as sulphuric acid, is a strong acid. It is also a chemical compound. Its chemical formula is H2SO4. It was known as "Oil of Vitriol" in ancient times.

It is a dense (thick), clear, corrosive liquid that can dissolve in water. It can also melt through some weak substances.

It was once known as "oil of vitriol". This name was created by Jabir ibn Hayyan, the person who discovered it. It used to be prepared by the reaction of potassium nitrate with sulfur. This reaction would produce sulfur trioxide which would dissolve in steam to produce sulfuric acid. Then this reaction was done in lead containers. The contact process, the most common process, was invented in 1831 and is still used today.

Sulfuric acid is very poisonous because of its acidity and corrosiveness. When it is mixed with sugar, it turns it into carbon.[1] When it is dissolved in water, it becomes less harmful (does not make things black) but is still corrosive like normal acids. It reacts with metals to produce hydrogen and the metal sulfate. Some metals, such as tin, make sulfur dioxide and tin(II) sulfate. It reacts with sodium chloride to make hydrogen chloride.