Hydrogen sulfide (British English: hydrogen sulphide) is the chemical compound with the formula H2S, is a colorless, toxic, flammable gas that is responsible for the foul smell of rotten eggs and flatulence. It often results when bacteria break down organic matter if there is no oxygen. This happens in swamps, and sewers (alongside the process of anaerobic digestion). It also happens in volcanic gases, natural gas and some well waters. This is the smell that people often think to be that of sulfur. But sulfur itself does not smell. 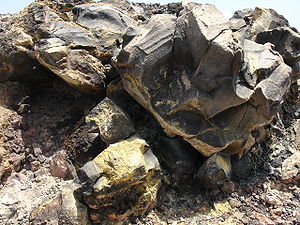 Deposit of sulfur on a rock, caused by volcanic gases containing hydrogen sulfide

Small amounts of hydrogen sulfide can be found in crude petroleum. Sour natural gas can contain up to 28%. But, sour natural gas must be cleaned before it can enter a long distance pipeline. Pipelines limit hydrogen sulfide to 3 grains per thousand cubic feet of natural gas.[6] Volcanoes and hot springs give off some H2S, where it probably is made by the hydrolysis of sulfide minerals, i.e. MS + H2O to give MO + H2S.

Hydrogen sulfide is a highly toxic and flammable gas. Because it is heavier than air it tends to accumulate at the bottom of poorly ventilated spaces.

Hydrogen sulfide is considered a broad-spectrum poison, meaning that it can poison several different systems in the body, although the nervous system is most affected. The toxicity of H2S is comparable with that of hydrogen cyanide.