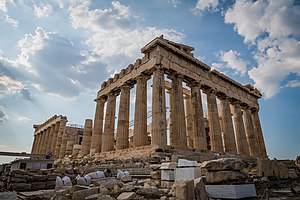 The parthenon of Ancient Greece

Ancient history is all the events we know about between the invention of writing and the start of the Middle Ages. Writing is one of the greatest inventions of the human species. It was invented after the Neolithic revolution in which people settled in small towns and started agriculture. Writing dates from about 3,300 BC, which is over 5000 years ago, in the Middle East. The first people to use writing were the Sumerians and the Ancient Egyptians.[1]

Before writing, the only things we have are the tools and monuments made by earlier people. This is studied by archaeology rather than history. The period of ancient history ends with the early Middle Ages.

Finding facts about ancient history is difficult because people wrote less in those times and much of what they did write has been lost. There were very few copies made because there was no printing. What people wrote they wrote by hand. More people could read and write in Ancient Rome than in other places but much of what they wrote is now lost. Historians also look at things that were made and used in ancient history to learn more about it.

Archaeology is looking at things that were made or used in the past to learn about that time. Things like clay pots, solid tools, and metal weapons can stay the same during a long time. Things like paper, wood, and cloth can be easily broken, burnt or damaged.

Primary sources are written by people who lived in ancient times. They tell us most of what we know about ancient history. But people in ancient history may have believed different things from each other. They may also be wrong.

Some groups of people in ancient history