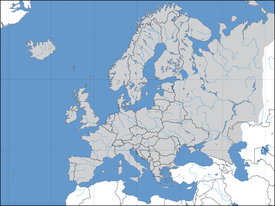 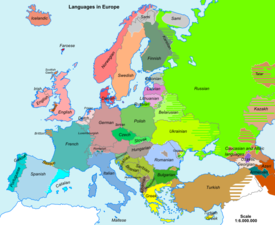 The languages of Europe 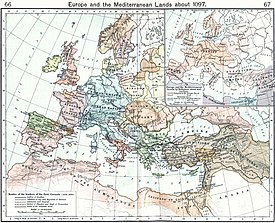 Europe is the western part of the continent of Eurasia, often thought of as its own continent. It is separated from Asia by the Ural Mountains in Russia and the Bosporus strait in Turkey.

Europe is bordered by water on three sides. On the west is the Atlantic Ocean. To the north is the Arctic Ocean. The Mediterranean Sea separates Southeastern Europe from Africa. On the eastern border of Europe are the Ural River and Ural Mountains.

There are at least 43 countries in Europe (the European identities of 5 transcontinental countries: Cyprus, Georgia, Kazakhstan, Russia and Turkey are disputed). Most of these countries are members of the European Union.

Europe is a major tourist attraction. People come from all over the world to see its many World Heritage Sites and other attractions.

Europe is named after a princess in Greek mythology called "Europa." The myth says that Zeus kidnapped Europa and took her to Crete, where she became the mother of King Minos (from whom Europe’s first civilization gets its name, the Minoans).

The name "Europa" was later used to describe Greece. Then, as the rest of modern-day Europe started to have cities and empires, the entire area West of the Ural Mountains came to be called "Europa".

The history of Europe is long and has many turns. Many great countries originated from Europe. Greek mythology and the beginning of western civilization came from European nations.

Some of the major periods in European history have been:

There are several major regions of Europe:

Within these regions, there are up to 48 independent European countries (with the identities of 5 transcontinental countries being disputed). The largest is the Russian Federation, which covers 39% of Europe.

Two European countries, the United Kingdom and the Republic of Ireland, are on islands called the British Isles.

Most of Europe lies in temperate climate zones.

However, there are many different climates throughout Europe. For example, during the winter, it may be snowing and -30 degrees Celsius for 4–5 months in Finland. Yet it may be much warmer, with no snow at all except on high mountains, in Spain.

The European Union is a confederation of 27 European countries. These countries agree to follow common laws so that their citizens can move and trade in EU countries almost the same as they do in their own. Nineteen of these countries also share the same type of money: the euro.