i/isˈtoʊniə/ (Estonian: Eesti), officially the Republic of Estonia (Estonian: Eesti Vabariik) is a small country in the Baltic Region of Northern Europe. The capital city is Tallinn. Estonia's neighbors are Sweden, Finland, Russia and Latvia. Its population is 1,332,893.[10]

The territory of Estonia has the mainland and 2,222 islands in the Baltic Sea.[11]

People have lived in Estonia since at least 9,000 BC. The oldest known settlement in Estonia is the Pulli settlement, which was on the banks of the Pärnu River.

Estonia became independent from Russia in 1920 after a brief War of Independence at the end of World War I. During World War II (1939–1945), Estonia was occupied by the Soviet Union and Germany. It then became the Estonian Soviet Socialist Republic and lost its independence.

Estonia had its independence restored in 1991.[12] It became a member of the North Atlantic Treaty Organization (NATO) on 29 March 2004. It joined the European Union on 1 May 2004.

In January 2021, Estonia became the only country in the world led by women by having a female president (Kersti Kaljulaid) and female prime minister (Kaja Kallas).[13]

Over 300 bird species have been found in Estonia. These include the white-tailed eagle, lesser spotted eagle, golden eagle, western capercaillie, black and white stork, many species of owls, waders, geese and many others.[19] The Barn swallow is the national bird of Estonia.[20]

Protected areas cover 18% of Estonian land and 26% of its sea territory. There are 5 national parks, 159 nature reserves, and many other protection areas.[21]

The Riigikogu is the name of the parliament in Estonia. 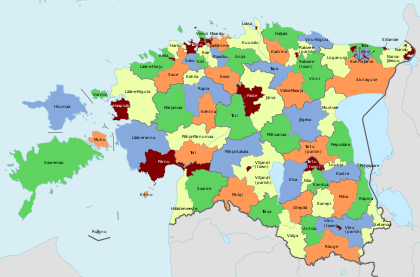 According to speedtest.net, Estonia has one of the fastest Internet download speeds in the world with an average download speed of 27.12 Mbit/s.[23]

Estonia won the Eurovision Song Contest in 2001 with the song "Everybody" performed by Tanel Padar and Dave Benton. In 2002, Estonia hosted the event.

The following are links to international rankings of Estonia.