A moose (Alces alces; called elk in Europe) is a large deer. Some authorities put the American moose in a different species, Alces americanus.

Moose live in northern Europe, Asia, and in North America. Moose usually live in areas with lakes, marshes and swamps. They also live in mountain ranges.

Moose live in North America and also range from northern Europe to Siberia. In Europe they live in Finland, Sweden, Norway, Poland and the Baltic countries (Estonia, Latvia and Lithuania). In North America they live in Canada, Alaska and northern parts of the United States. In 2008 they were re-introduced to Scottish Highlands from Scandinavia.

There are about 115,000 moose in Finland, and about the same number in Norway. Alaska has about 200,000. Canada and Russia each have between 500,000 and one million. There are also some in the continental United States. The animal is widely distributed. 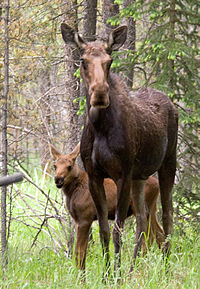 A female moose and her calf.

Moose are active during the day. They live alone, but in winter they sometimes form small groups. Moose eat grass, leaves, twigs, willow, birch, maple shoots and water plants. After a pregnancy of 8 months, the female gives birth to one or two calves. Females can first become pregnant when they are between two and three years old. Young moose stay with their mother for a year; after one year they leave and live alone. Moose usually live to fifteen years old, but they can reach as old as twenty-seven years old. A mother moose will aggressively protect her young. Moose calves are hunted by bears and wolves. 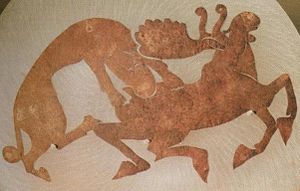 Iron Age saddle from Siberia, depicting a moose being hunted by a Siberian tiger.

A full-grown moose has few natural enemies. Siberian tigers prey on adult moose.[3][4] Wolves also pose a threat, especially to females with calves.[5] Brown bears are known to prey on moose, although bears are more likely to take over a wolf kill or to take young moose than to hunt adult moose on their own.[6] American black bears and cougars can take moose calves and can sometimes kill adult cows.[7][8] Wolverine are most likely to eat moose as carrion but have killed moose, including adults, when the moose are weakened by harsh winter conditions.[9] Killer whales are the moose's only known marine predator. They have been known to prey on moose swimming between islands off North America's northwest coast.[10]

Moose have been hunted by humans since the Stone Age.

Because of their dark coloured fur, moose are hard to see when they are crossing roads at night. They are sometimes hit by cars. In some countries like Canada, Finland and Sweden there are moose warning signs on roads and motorways are fenced.