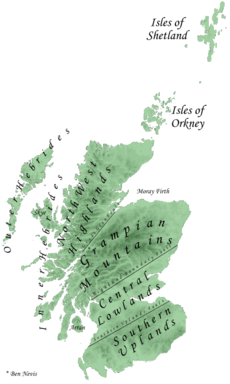 The main geographical
divisions of Scotland

The annotated face of Ben Nevis

The Scottish Highlands is an historic region of Scotland. It is the area to the north of the Highland Boundary Fault. The fault separates the hard igneous and metamorphic rocks to the north from the softer sedimentary rocks of the Scottish Lowlands in the south.

The Highlands are divided in two parts. The Great Glen divides the Grampian Mountains to the southeast from the Northwest Highlands.

The area is generally sparsely populated, with many mountain ranges, and includes the highest mountain in the British Isles, Ben Nevis.

Before the 19th century the Highlands was home to a much larger population but, for several reasons, the area is now one of the most sparsely populated in Europe. The average population density in the Highlands and Islands is lower than that of Sweden, Norway, Papua New Guinea and Argentina.

The reasons for the low population include the harsh nature of the land. Also, the outlawing of the traditional Highland way of life after the Jacobite Rising of 1745, the infamous Highland Clearances, and mass migration to urban areas during the Industrial Revolution all had their effects.

People from this region are traditionally called highlanders.