The main geographical
divisions of Scotland

The Highland Boundary Fault is a geological fault that crosses Scotland diagonally from Arran and Helensburgh on the west coast to Stonehaven in the east. It separates two distinctly different regions: the Highlands from the Lowlands.[1][2]

The geological history of Scotland can be understood as the result of two great tectonic events. The first was the formation of the global super-continent Pangaea, the second was the break-up of Pangaea to form the continents we know today.

The fault is the middle of three great faults which run south-east to north-west across Scotland. In the north there is the Great Glen Fault, and in the south the Southern Uplands Fault. Further south, just over the border with England, is the Iapetus Suture, where the palaeo-Iapetus Ocean closed. These four major geological signs mark the ancient history of Scotland. 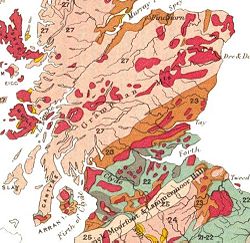 Geological map of central Scotland. The fault divides the Old Red Sandstone and Devonian deposits (brownish, no. 23, at centre) from the Metamorphic and Archaean deposits (pinkish, no. 27, above the brownish).

Reekie Linn ('smoking pool'): clouds of spray rise above the plunge pool when the River Isla is in spate. It is a waterfall formed on the Highland Boundary Fault where hard metamorphic rocks to the north give way to the softer sedimentary rocks of Strathmore. This view is taken looking upriver towards the Bridge of Craigisla.

The Highland Boundary Fault was active during the Caledonian orogeny.[1] This was a plate tectonic collision which took place from Mid Ordovician to Mid Devonian periods (520 to 400 million years ago), during the closure of the Iapetus Ocean.

The fault allowed the Midland Valley to descend as a major rift by up to 4000 metres and there was subsequently vertical movement. This movement was later replaced by a horizontal shear. A complementary fault, the Southern Uplands Fault, forms the southern boundary for the Central Lowlands.[3]

Close up of Earthquake House, Comrie. Lying on the Highland Boundary Fault, Comrie has experienced many tremors in the past, hence its nickname, "Shaky Town". The World's first seismometer was set up here in 1840 and housed in this building in 1869.