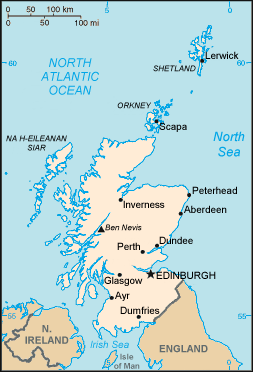 Scotland (Scottish Gaelic: Alba) is a country in North Western Europe, which is part of the United Kingdom.

It is the northern half of the island of Great Britain, with a population of about five million. Scotland shares a border with England. Scotland has coasts on the North Sea to the east, the Atlantic Ocean to the west and the Irish Sea to the south-west.

Even though Scotland is not independent, throughout history it has had its own legal system and culture. Since 1999, Scotland has had its own parliament, but it is not as powerful as the British parliament in Westminster. Many things are still controlled by the United Kingdom parliament. On 18 September 2014, a referendum took place and a majority (55%) voted to stay in the United Kingdom, though the cities of Glasgow and Dundee supported independence by a majority.

The Scottish flag is blue with two white diagonal crosses (called a saltire). This is the cross of Saint Andrew, who is the patron saint of Scotland. Some other symbols used for Scotland are a thistle, and a lion rampant.

The north of Scotland has many mountains, and few people live there. Most people live in the lowlands (Edinburgh,Glasgow, Aberdeen and Dundee), or around the coast. South of the central belt are the Southern Uplands, another hilly place. On the west coast and in the north are a lot of islands. The tallest mountain in Scotland is Ben Nevis, which is also the tallest mountain in the British Isles.[10]

The capital city of Scotland is the city of Edinburgh, on the east coast. The biggest city is Glasgow. Other cities in Scotland are Aberdeen, Dundee, Inverness, Perth and Stirling.

The main part of Scotland makes up ⅓ of the size of the British Isles, and is to the northwest of mainland Europe. 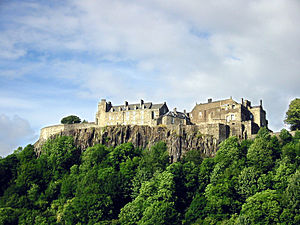 Stirling Castle has stood for centuries on top of a volcanic crag. It defended the lowest ford of the River Forth. The castle underwent many sieges.

The history of Scotland begins around 10,000 years ago, when humans first began to live in Scotland after the end of the last ice age. Of the Stone Age, Bronze Age, and Iron Age civilization that existed in the country, many fossils remain, but no written records were left behind. These people did not have writing.

The written history of Scotland begins when the Roman Empire came to Britain, and the Romans invaded what is now England and Wales, calling it Britannia. To the north was Caledonia, land not owned by the Romans. Its people were the Picts. This meant the Scottish were not affected by the Romans in the same way the English were. The sea was very important for trade reasons.

Because of where Scotland is in the world and its strong reliance on trade routes by sea, the nation held close links in the south and east with the Baltic countries, and through Ireland with France and Europe. Following the Acts of Union and Industrial Revolution, Scotland grew to be one of the largest commercial, intellectual and industrial states in Europe. 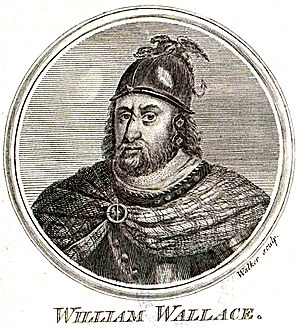 The Wars of Scottish Independence were many military campaigns fought between Scotland and England in the late 13th and early 14th centuries.

The wars were part of a great national crisis for Scotland and the period became one of the most important moments in the nation's history. At the end of both wars, Scotland still was a free and independent country, which was its main aim throughout the conflict. The wars were also important for other reasons, such as the invention of the longbow as an important weapon in medieval warfare.

A series of deaths in the line of succession in the 1280s, followed by King Alexander III's death in 1286 left the Scottish crown in crisis. His granddaughter, Margaret, the "Maid of Norway", a four-year old girl, was the heir.

Edward I of England, as Margaret's great-uncle, suggested that his son (also a child) and Margaret should marry, stabilising the Scottish line of succession. In 1290 Margaret's guardians agreed to this, but Margaret herself died in Orkney on her voyage from Norway to Scotland of sea sickness before she was made Queen, or her marriage could take place.

Because there was no clear heir to the throne anymore, the Scottish people decided to ask Edward I of England to choose their king. The strongest candidate was called Robert Bruce. Robert Bruce had castles all around the country, and had a private army. But Edward wanted to invade Scotland, so he chose the weaker candidate, who was John Balliol. He had the strongest claim to the throne, and became king on 30 November 1292. Robert Bruce decided to accept this decision (his grandson and namesake later took the throne as Robert I).

Over the next few years, Edward I kept trying to undermine both the authority of King John and the independence of Scotland. In 1295, John, on the recommendation of his chief councillors, entered into an alliance with France. This was the beginning of the Auld Alliance.

In 1296, Edward invaded Scotland. He removed King John from power, and put him in jail. The following year William Wallace and Andrew de Moray raised an army from the southern and northern parts of the country to fight the English. Under their joint leadership, an English army was defeated at the Battle of Stirling Bridge. For a short time Wallace ruled Scotland in the name of John Balliol as Guardian of the realm.

Edward came north in person and defeated Wallace at the Battle of Falkirk in 1298. Wallace escaped but resigned as Guardian of Scotland. John Comyn and Robert the Bruce were put in his place. In 1305 Wallace was captured by the English, who executed him for treason. Wallace claimed he did not commit treason as he was not loyal to England. 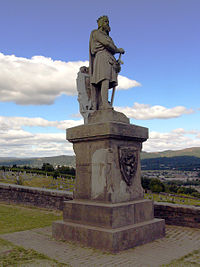 In February 1306 Robert Bruce murdered John Comyn, a leading rival, in a church. Bruce went on to take the crown, but Edward's army overran the country yet again after defeating Bruce's small army at the Battle of Methven. Despite the excommunication of Bruce and his followers by Pope Clement V, his support slowly strengthened; and by 1314, with the help of leading nobles such as Sir James Douglas and the Earl of Moray, only the castles at Bothwell and Stirling were still under English control.

Edward I died in Carlisle in 1307. His heir, Edward II, moved an army north to break the siege of Stirling Castle and again take control. Robert defeated that army at the Battle of Bannockburn in 1314, securing temporary independence. In 1320, a letter to the Pope from the nobles of Scotland (the Declaration of Arbroath) went part of the way towards convincing Pope John XXII to overturn the earlier excommunication and cancel the various acts of submission by Scottish kings to English ones so that Scotland's independence could be recognised by other European countries.

In 1326, the first full Parliament of Scotland met. The parliament was made from an earlier council of nobility and clergy around 1235, but in 1326 representatives of the burghs — the burgh commissioners — joined them to form the Three Estates.

In 1328, Edward III signed the Treaty of Northampton which declared Scottish independence under the rule of Robert the Bruce. Four years after Robert's death in 1329, England invaded Scotland yet again, looking to put the "Rightful King" — Edward Balliol, son of John Balliol — to the Scottish throne, starting the Second War of Independence. In the face of tough Scottish resistance, led by Sir Andrew Murray, attempts to secure Balliol on the throne failed. Edward III lost interest in Balliol after the outbreak of the Hundred Years' War with France. In 1341 David II, King Robert's son and heir, was able to return from temporary exile in France. Balliol finally resigned his empty claim to the throne to Edward in 1356, before retiring to Yorkshire, where he died in 1364.

Most of the Scottish islands were ruled by the Norse (and then by Norwegians and Danes) for over four hundred years. This includes the Hebrides to the west and Orkney and Shetland to the north. The islands still have a culture of their own. St Kilda, Heart of Neolithic Orkney and Skara Brae are all World Heritage Sites, as are the Antonine Wall and New Lanark on the mainland.

In 1603, Queen Elizabeth I of England died and, because she did not have any children, James VI of Scotland (son of Mary, Queen of Scots) also became King James I of England. In 1707, Scotland and England were joined in the Act of Union. When Ireland joined in 1801, the United Kingdom was created.

In 1997, a majority of voters in Scotland chose to have their own Scottish Parliament, which was set up in 1999. Former First Minister of Scotland Alex Salmond led the Scottish National Party to government in Scotland in 2007 and won an overall majority in 2011, taking 69 out of 129 seats. The Scottish independence referendum, 2014 ended in a majority (55%) voting against independence from the United Kingdom. Alex Salmond resigned shortly after and was succeeded by Nicola Sturgeon on 19 November 2014.

The official languages of Scotland are English, Scots, and Gaelic. English is spoken by most people in Scotland, with only a small number, mostly in the Western Isles, speaking Gaelic.[11] 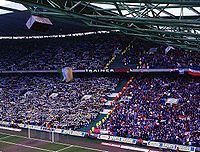 Both sets of fans at an Old Firm match at Celtic Park.

Football is the most popular sport in Scotland. Three of the big cities, Glasgow, Edinburgh and Dundee, have two or three big football teams, and most cities have at least one team. The two most famous teams in Scotland are known as the "Old Firm". These are Celtic and Rangers. These two Glasgow clubs have a lot of history, and are fierce rivals, often causing fights, riots and even murders between the fans. Rangers are world record holders, having won the most amount of league titles of any football team, currently 54.

Scotland were the winners of the Homeless World Cup in 2007 and are the current champions after they won in August 2011. They defeated Mexico 4–3 in Paris, France.[12]

The other main clubs in Scotland are Aberdeen, Hearts, Hibs and Dundee United. These teams are in the Premier League right now, and usually take the most places in the top six of the league.

Some other Scottish clubs include Gretna, who won three titles in a row, moving from the Third Division, to the SPL in only three seasons. Gretna ran out of money, and they were shut down. Also, Raith Rovers, who famously played UEFA Cup Winners, Bayern München. Raith Rovers were knocked out by Bayern München, but managed to lead 1-0 at half time.

The top division of Scottish Football is called the "Scottish Premier League" (or SPL), and is currently sponsored by the Clydesdale Bank, a large Scottish Bank. In 2013, its name was changed to "Scottish Premiership".

In 1925, 1984 and 1990, Scotland were winners of the Five Nations' Gran Slam, having beaten all four other teams - England, Wales, Ireland and France.

Golf is a popular sport in Scotland. It is unique, as Scotland is the birthplace of golf, and there are many public golf courses where people can play for small fees. Everywhere else in the world, golf is a game for the rich.

Sandy Lyle was the first Scottish golfer to win a major title in modern times. Colin Montgomery is one of the best players never to have won a major championship after finishing second five times.

Scotland were the world champions of the unusual sport of Elephant Polo in 2004. Elephant Polo, registered as an Olympic sport with the Nepal Olympic Committee, was invented by Scotsman Nathan Mochan in 1983.[13]

Andy Murray, originally from Scotland, is currently the United Kingdom's best tennis player, having won singles titles at the US Open, and Wimbledon, where his 2013 win ended a 77-year wait for a British man to win the competition. He also won Olympic Gold in the men's singles at the 2012 Summer Olympics in London. His brother, Jamie Murray, is also a successful doubles' player. 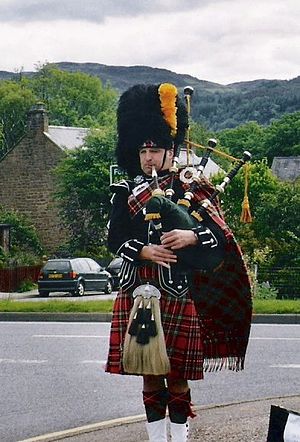 Traditional Scottish musical instruments include: the bagpipe, accordion, the fiddle, the harp and tin whistle.