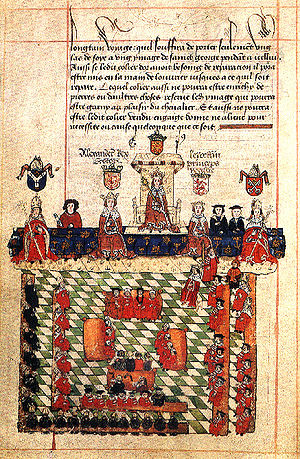 Today there have been increasing calls for England to receive its own, independent Parliament, as is the case with the other nations of the United Kingdom, Scotland, Wales, and Northern Ireland. This is called devolution.

The origin of Parliament can be found in the times of the Anglo-Saxons. Anglo-Saxon kings were advised by a council known as the Witenagemot, to which belonged the King's sons and brothers.

The Ealdormen, or executive heads of the shire and the senior clergymen of the state, had seats as well. The King still had the highest authority, but laws were made only after seeking the advice (and, in later times, the consent) of the Witenagemot.

The royal council slowly grew into a Parliament. The first time the word Parliament can be found in official documents was during Henry III's reign. It was still mostly informal, and not an official body. The right to vote in Parliamentary elections for county constituencies was the same everywhere in the country, giving a vote to everyone who owned the freehold of land to a rent of 40 shillings a year (Forty-shilling Freeholders).

The rise of Parliament's power was slowed down by civil war between Stephen and Empress Matilda. By the end of the Wars of the Roses, the king had the strongest authority again. The Crown was at the height of its power during the reign of Henry VIII.

The great struggle between the Crown and Parliament happened under James I's successor, Charles I. The House of Commons sent Charles the Petition of Right, demanding to have their rights again, in 1628. Though he accepted the petition, he later closed Parliament and ruled without them for eleven years. It was only after he had money problems as a result of war, that he was forced to call Parliament so they could authorise new taxes. The new Parliament was quite rebellious, so the king shut them down after only three weeks; this was called the Short Parliament. But this did not help the king with his money problem, so he realized that he would need to call another Parliament. Their struggle for power with the king led to the English Civil War. Those supporting the Parliament were called Parliamentarians or 'Roundheads'. In 1649, Charles was put to death by the Rump Parliament and replaced by the military dictator Oliver Cromwell. After Cromwell's death, however, the monarchy was restored in 1660.

Following the Restoration, monarchs agreed to regularly call Parliament. But there was no clear guarantee of Parliamentary liberties until James II, an unpopular Catholic ruler, was forced to flee the country in 1688. Parliament decided that he had given up his crown, and offered it to his Protestant daughter Mary, instead of his Catholic son. Mary II ruled together with her husband, William III.

Union: the Parliament of Great Britain