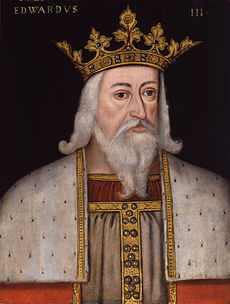 Edward III as he was portrayed in the late 14th century.

The Tudors were from Wales. In 1536, Wales became part of England. England had controlled Wales since 1284.

The Stuarts were also kings of Scotland, with which kingdom England was in personal, but not legal union until 1707.

The Civil War in England from 1642 until 1652 stemming from a growing enmity between King and Parliament, led to the execution of King Charles I in 1649. After the execution, England became a Commonwealth eventually led by Oliver Cromwell as Lord Protector after successive interim governments failed and handed Cromwell power, and so England became a protectorate.[1] Furthermore, both Ireland and Scotland became subjugated states under England and Cromwell at the end of the war. Cromwell died in 1658 and his son, Richard, became Lord Protector. This was short lived though as he failed to gain the support of the army and so the nation, in 1660 power was given back to the Monarchy and the King In Exile, Charles II, was invited back to England[2]