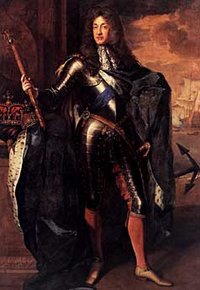 A painting of James II of England

He was the last Roman Catholic king in the British Isles. Some of his people did not like his religious ideas, leading a group of them to disobey and fight against him. This was called the Glorious Revolution in England and Scotland. King James and his son, James Francis Edward went into exile. The king was replaced by his Protestant daughter, Queen Mary II, and her husband King William III and II. They became rulers in 1689.

The belief that James, not William III or Mary II, was the one true ruler became known as Jacobitism (from Jacobus or Iacobus, Latin for James). James made one serious attempt to recover his throne when he landed in Ireland in 1689. After his defeat at the Battle of the Boyne in the summer of 1690, he returned to France, living the rest of his life under the protection of King Louis XIV. His son James Francis Edward Stuart (The Old Pretender) and his grandson Charles Edward Stuart (The Young Pretender and Bonnie Prince Charlie) attempted to restore the Jacobite line after James's death, but failed.