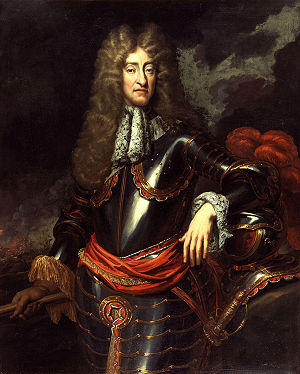 The name of the movement derives from deposed Stuart monarch, James II and VII.

Jacobitism was (and, to a much smaller extent, is) the political movement that tried to put the Stuart kings back onto the thrones of England, Scotland, and Kingdom of Ireland. The movement took its name from the Latin form Jacobus of the name of King James II and VII.

Jacobitism began after the deposition of James II and VII in 1688. He was replaced by his daughter Mary II jointly with her husband and first cousin William of Orange. The Stuarts lived on the European mainland after that, sometimes trying to get back the throne with the help of France or Spain. The most important places of Jacobitism were Ireland and Scotland, especially the Scottish Highlands. In England, Jacobitism was strongest in the north, and some support was also in Wales.

A great number of Catholic people liked Jacobitism. They hoped the Stuarts would end bad laws. Lots of different helped the military campaigns for all sorts of reasons. In Scotland the Jacobite cause became a lasting romantic memory.