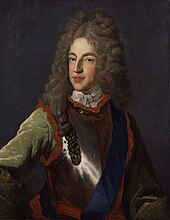 James, Prince of Wales (known as James Francis Edward Stuart; "The Old Pretender" or "The Old Chevalier"; 10 June 1688 – 1 January 1766) was the son of James II of England (James VII of Scotland) and his second wife, Mary of Modena.[1] Because of this, he claimed the English, Scottish and Irish thrones (as James III of England and Ireland and James VIII of Scotland) from the death of his father in 1701. He was proclaimed king of England, Scotland and Ireland by his cousin Louis XIV of France. When he died in 1766 in Rome, his son, Charles Edward Stuart, followed him in the Jacobite Succession.