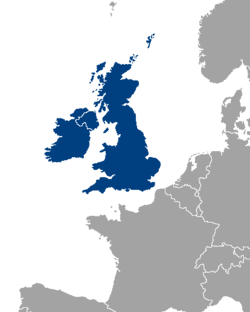 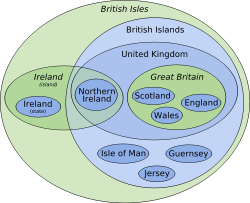 Venn diagram of various terms in the British Isles

The British Isles are an archipelago (a group of islands) in north-western Europe. They have a long geographical and geological history.[1] The first men were in Britain by 800,000 years ago (Happisburgh footprints).

England, Wales, Scotland and Northern Ireland join together to make the United Kingdom.

Some people include the Channel Islands of Jersey, Guernsey, Sark in the term "British Isles", but they are a lot closer to France than to Great Britain. In politics, they are British islands but in geology they are French islands.

The term tends not to be used in the Republic of Ireland because many people feel it implies that Ireland is politically British.