Image from the Lascaux caves 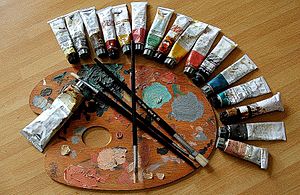 Painting is using colors to make visual art. It is also the word for a painted work of art. Many kinds of paints are used to create art. They include watercolors, acrylics and oils. Other artists like working with pencil or chalk. Sometimes charcoal can be used.[1]

Famous paintings are often kept in art galleries, like the National Gallery in London and the Louvre (Paris) where one of the most famous paintings in the world hangs, the Mona Lisa, painted by Leonardo da Vinci. People do not have to go to a famous gallery to view art. There are private art galleries in many cities around the world.[2]

There is a basic difference between drawing and painting. In drawing, a single layer is the entire image. In painting, one layer is painted over another to get the final image. As a result, most of the time the image will not be clear until it gets to the final stage.

There are four basic stages in painting: preparation, divide, layer, and touchup.