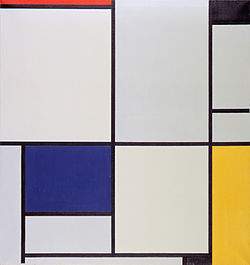 He painted in an increasingly abstract style, until he finally achieved the style which made him famous. By 1920, he adopts a totally abstract motif, with an irregular checkerboard drawn with black lines, and with the spaces paints mostly white or sometimes in the primary colors of blue, red and yellow. This style is geometric abstraction with primary color.

Mondrian painted about 250 of these geometric abstracts, from 1917 to 1944. Mondrian called his style “neoplasticism”.

Escaping in 1940 from a Europe at war, Mondrian spent the last four years of his life in New York City. His paintings of that time express exuberance at city life. In his final painting, Broadway Boogie Woogie (1942/43), the checkerboard lines, previously black, are now painted blue, gray, red and yellow. The yellow was apparently inspired by New York’s Yellow cabs.