Fresco is a way of painting pictures. A fresco is a kind of mural, a painting that is done on a wall. A wall painting is sometimes called afresco by mistake. A true fresco is painted onto plaster that is fresh. The plaster has been laid on the wall that day and is still damp. The word fresco comes from the Italian for "fresh". 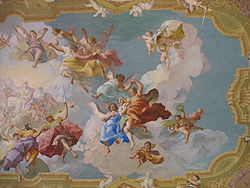 Advantages and disadvantages of fresco painting

Fresco is a very good way of painting pictures on walls. It is much easier than painting on dry plaster because paint sinks into dry plaster immediately. Painting on fresh plaster means that the artist can spread the paint much easier. Also, fresco is permanent because the paint joins with the plaster so that the colours will not rub off. Frescoes last for hundreds of years. If they are kept clean and dry, the colours will stay bright for a very long time. Fresco does not use dangerous chemicals. The water, the calcite and the colours do not cause pollution.

The problems with painting frescos come from the plaster. It must be mixed up and put on the wall freshly every day and left to partly dry before it can be used. As the plaster begins to dry or "set", the artist can start the picture. The work must be very quick and careful. If there is a mistake, the plaster must be scraped off. While the plaster is setting, it becomes hot and gives off gases. This makes working on a fresco unpleasant. Because frescos are on walls, or ceilings, they can not be moved from place to place, or rearranged, like other paintings.

Method - the way to paint frescoes

The artist must plan the work carefully. It starts with a small drawing of the picture, The artists then makes a large drawing, called a cartoon, and works out the right order to paint the picture, because a big picture might take more than a week to paint. Each day's work is called by the Italian name giornata. Giorno means "day".

When the day's work starts, the artist needs to work fast so there is usually another worker or assistant who mixes the plaster and helps the artist.

As the painting dries, the artist works over the whole giornata again, putting in details of the faces and the clothing, and painting shadows.

At the beginning of the next day's work, the plaster edge of the last giornata is scraped so that the new plaster joins well. Often it is possible to see the joins and work out how many giornata it took to do a single painting.

The Royal Palace at Knossos in Crete, c. 1500 BC, had many frescoes. The scene of athletes dancing with a bull is the most famous.

Many Ancient Roman wall paintings can be seen at Pompeii from the 1st century AD, but these are not true frescoes.

The Sigiriya Frescoes painted in Sigiriya in Sri Lanka around 485 AD use the "fresco lustro" technique which varies slightly from the pure fresco technique in that it also contains a mild binding agent. This gives the frescoes added durability as they have survived exposed for nearly 1500 years. 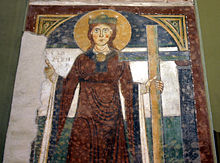 There are many frescoes dating from the late Middle Ages, about 1000-1400 AD when, it was the fashion to paint the inside of churches with people and stories from the Bible. The order of the pictures was carefully planned by the artists and priests. Above the altar is usually seen a picture of Jesus Christ. On the west wall is often a frightening picture of The Last Judgement to remind people to turn to Jesus. Many frescoes like this can be seen in Greece, Spain, Portugal, Serbia, Armenia, Romania and Russia. There are a few in Germany, France and Italy.

The Baptism of Christ, in the Arena Chapel, Padua, by Giotto.

In Italy, around 1300 AD, the artist Giotto painted frescoes that were so full of life that people were amazed. Each picture was like looking onto a stage where real people told the story. This was the beginning of the period of art history called the Renaissance. Giotto's frescoes became so famous that he had many pupils and followers. Giotto's most famous frescoes are in the Arena Chapel in Padua. He also painted in the Church of St. Francis at Assisi and at Santa Croce (Church of the Holy Cross) in Florence.

A hundred years later, about 1400 AD, two artists called Masolino and Masaccio worked in the city of Florence, painting a chapel. Their names translate as "Little Tom" and "Fat Tom". Masaccio's way of painting was the biggest change since Giotto, in particular the two weeping naked figures of Adam and Eve. Everyone thought that Masaccio was one of the greatest painters alive. But he died at only 27 years old. These frescoes are in the Church of the Carmine, in Florence.

God creating Adam from the ceiling of the Sistine Chapel, by Michelangelo.

In the 1400s many other artists in Italy were given the job of painting churches or chapels. They were paid by patrons, rich people who could afford an artist. The most important patron was the Pope. Pope Sixtus IV had built a new chapel in the Vatican in Rome. In 1481, he got some of the best artists in Italy to decorate the walls for him. See Sistine Chapel.

In 1508 the work continued in the Sistine Chapel when Pope Julius II made the great artist Michelangelo go to Rome to paint the ceiling. It took him four years, and he became sick from the strain and the smell. But when he had finished, he had painted one of the greatest artworks in the world. Then, 1537-1541, he painted the west wall of the same chapel with The Last Judgement

For the next 200 years, painted ceilings were in fashion. But artists soon discovered that it was easier to paint in oil on canvas and put it up on the ceiling than to paint on the ceiling in fresco. The fashion for fresco painting began to fade.