The Last Judgement by Michelangelo 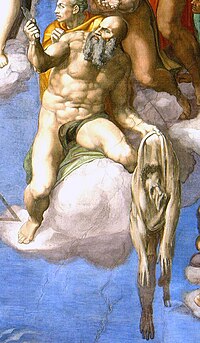 St. Bartholomew displaying his flayed skin (a self-portrait by Michelangelo) in The Last Judgment.

The Last Judgment is a mural by Michelangelo on the altar wall of the Sistine Chapel in Vatican City. It took nine years to complete. Michelangelo began working on it thirty years after finishing the ceiling of the chapel.

The work spans the entire wall behind the altar of the Sistine Chapel. It was painted between 1534 and 1541. The Last Judgment shows the second coming of Christ and the apocalypse. The souls of humans rise and descend to their fates, as judged by Christ surrounded by his saints.

There was a dispute regarding The Last Judgment between Cardinal Carafa and Michelangelo: Michelangelo was accused of immorality and obscenity, because he had painted naked figures, with their genitals well visible. The cardinal said that this could not be tolerated inside the most important church of Christianity. A censorship campaign was lauched, known as the "Fig-leaf campaign". Carafa and Monsignor Sernini (Mantua's ambassador) launched the campaign to remove the frescoes. When the Pope's own Master of Ceremonies, Biagio da Cesena, said "it was mostly disgraceful that in so sacred a place there should have been depicted all those nude figures, exposing themselves so shamefully," and that it was no work for a papal chapel but rather "for the public baths and taverns," Michelangelo worked the Cesena's semblance into the scene as Minos, judge of the underworld (far bottom-right corner of the painting). It is said that when Cesena complained to the Pope, the pontiff responded that his jurisdiction did not extend to hell, so the portrait would have to remain.

The genitalia in the fresco were later covered by the artist Daniele da Volterra, whom history remembers by the derogatory nickname "Il Braghettone" ("the breeches-painter").

In the painting, Michelangelo does a self portrait depicting himself as St. Bartholomew after he had been flayed (skinned alive) This is reflective of the feelings of contempt Michelangelo had for being commissioned to paint "The Last Judgement".[1]