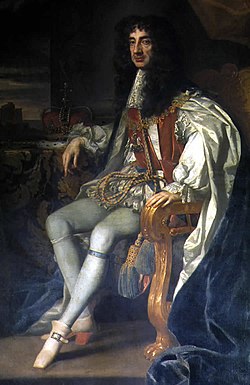 King Charles II, the first monarch to rule after the English Restoration.

Prince Charles was the king's eldest son. As a little boy, he was made Prince of Wales as a sign that he would one day be king.

By the time he grew into a young man, his father was already at war with Parliament in the English Civil War.

Prince Charles did not take much part in the fighting. His mother, Henrietta Maria, was French, and she took her children to France when the war broke out, to keep them safe.

Prince Charles was only eighteen when he heard that his father was dead.

This made him King, and he started calling himself King Charles II immediately, but Parliament was still in control of Britain and would not let him take his throne.

In 1651, Charles II returned to Britain and fought Parliament at the Battle of Worcester.

He was defeated, but is supposed to have escaped by hiding in an oak tree.

Later, he was forced to disguise himself as a servant. A young lady called Jane Lane helped him to escape,

and he sailed to the Netherlands to re-join his supporters. He kept his own royal court there until 1660.

While Charles was in Holland, Britain was being ruled by Oliver Cromwell, an extraordinary man who had no title, but many followers. He was chosen as leader of the country by Parliament. When Cromwell died in 1658, his son Richard was chosen to be the next leader.

Richard Cromwell was not the man his father was. Charles II was asked to come back and rule Britain. In 1660, Charles II was brought back to Britain and took his throne. This was the English Restoration.

Many of his enemies were punished for having executed his father and fought against him, but Richard Cromwell was allowed to go and live quietly away from London.

Charles was popular and was called "The Merry Monarch" because he changed many laws that Cromwell had made and allowed people more freedom to enjoy themselves.

He liked to go to the theater, play cards and enjoy sports such as horse racing.

Some people thought that a king should be more serious and not spend so much time and money on fun.

There were also some people who did not like King Charles II because of his religious beliefs. He had been brought up by his mother, who was Roman Catholic, while most people in the country were Protestant.

He married a princess from Portugal, Catherine of Braganza. They did not have any children, but Charles refused to divorce Catherine. Before he was married, he had several girlfriends and lovers, and even after he was married he went on having lovers, who were called "mistresses".

The most famous was an actress called Nell Gwyn. Several of Charles's lovers had babies, but none of these children were allowed to follow Charles as king, because they were "bastards", meaning that they had been born to parents who were not married to each other.

The most popular of Charles II's children was James Scott. Charles gave him the title Duke of Monmouth. James's mother had been Charles's girlfriend when he was living in Holland, and some people said that they had been secretly married. If this had been true, then James would have been allowed to be king when Charles died. There were many who wanted this to happen, because they did not like the thought of Charles's younger brother being the next king. This brother, who was also called James, was a Roman Catholic and was not popular.

By Marguerite or Margaret de Carteret

By Barbara Villiers Palmer (1641–1709), wife of Roger Palmer, 1st Earl of Castlemaine created Duchess of Cleveland in her own right

later Duke of Marlborough, who was another of Cleveland's many lovers,[5] and was never acknowledged by Charles as his own daughter.[6] By Nell Gwyn (1650–1687)

Duke of Lennox (1675) in Scotland. Ancestor of Diana, Princess of Wales, Camilla, The Duchess of Cornwall, and Sarah, Duchess of York. By Mary 'Moll' Davis, courtesan and actress of repute[7]