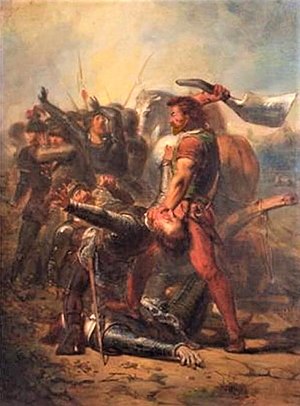 A rebellion is when people refuse to obey orders and fight back against authority. It may happen when the citizens of a country take over the government by force because they do not trust the current system. Also, throughout history, there have been some slave rebellions when slaves fought back against their masters and against the slave system in general. Some slaves who have led slave rebellions include Spartacus and Nat Turner.

An example would be the Zhou leaders in China who made the rulers of other Chinese states that they captured live with their own families in the Zhou capital, Anyang. However, they failed to stop rebellion this way because it only brought on groups of lords who might rebel under their control. The Zhou dynasty declined because other lords that were ruling parts of China rebelled.tt:Баш күтәрү