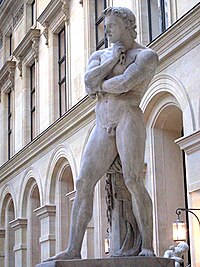 Spartacus statue at the Louvre in Paris, France

Spartacus (circa 120 BC[1] – circa 70 BC, at the end of the Third Servile War), according to Roman historians, was a gladiator-slave who became the leader of an unsuccessful slave uprising against the Roman Republic.