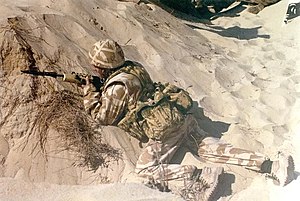 Infantry is the branch of a country's army that fights on foot.[1] A member of the infantry is called an infantryman. Infantrymen are also called foot soldiers or footmen. Infantry is different than cavalry because infantry members fight on their own two feet, without vehicles or animals to ride on. Historically, infantrymen were trained to use spears, swords and shields. Modern infantrymen are trained to use many different kinds of weapons, including rifles, grenades, rocket launchers, pistols, sniper rifles, and machine guns. It is one of the most dangerous jobs in any country's military. Since the end of World War II, 81% of Americans killed in battle were infantrymen.[2] This is despite the fact that the infantry made up only about 4% of the US military.[2] The infantry is the backbone of the military and the most important branch of the army.

Help Improve This Page: Please contact us to become an approved KidzSearch editor and provide your credentials. Provide feedback on this article in our Infantry Forum