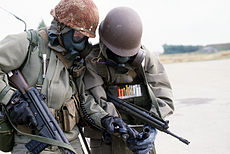 Chemical warfare does not include using living organisms (like anthrax bacteria) to make people sick. That is called biological warfare.

However, some living organisms make toxins (poisons). These toxins are not alive. For example, botulinum toxin is made by a bacteria, and ricin is made by the castor oil plant. Because botulinum toxin and ricin are not alive, using them to make people sick is called chemical warfare. This is explained in the Chemical Weapons Convention (CWC). The Convention also says that any toxic chemical is a chemical weapon unless it is used for legal reasons.[3]

About 70 different chemicals have been used or stockpiled (saved up) as chemical warfare agents during the 20th century. The Chemical Weapons Convention says that all of these chemicals should be destroyed.[4]

Since modern chemical warfare started in World War I, countries have tried to research and make chemical weapons. They have had four main goals:

Chemical warfare was first used during the Stone Age. Stone Age people used poisoned arrows and spear-tips. These were dipped in poisons, like venom from snakes or scorpions. Sometimes they used poisonous plants.

The Ancient Chinese used different forms of poisonous smokes, when they besieged a city to try to take it over.

The Ancient Greeks used a form of burning wood, pitch from plants, and sulphur. 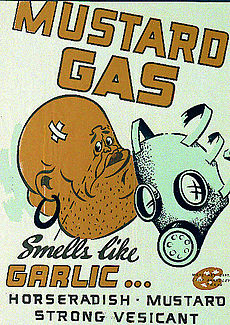 Poison gas was first used in World War I. France was the first country to make this type of gas. However, Germany was the first to use it in battle, on March 15th, 1915. On that day, they used tear gas against France.

The three types of gas used in World War One were:

At first, very basic ways of spreading these gases were used. Even so, many soldiers could be hurt or killed. This was partly because World War I was fought usingtrench warfare, so many soldiers would be in the same place at the same time, and escaping from poisonous gases would be very hard.

Germany was the first country in World War I to use chemical warfare in battle.[6] They simply opened containers of chlorine upwind of enemy soldiers, so that the wind would carry the chlorine gas to their enemies.

The United States has used chemical weapons even after World War II. For example, the U.S. used Agent Orange during the Vietnam War.

It has been reported that many other countries, like the People's Republic of China, Cuba, Egypt, Iran, Israel, North Korea, Pakistan, Sudan, Syria, Taiwan, and Serbia and Montenegro, have chemical weapons.

The first international law to make chemical warfare illegal was the Hague Convention in 1899.

After World War I, the Geneva Protocol of 1925 made it illegal to use chemical or biological weapons on people.

In 1997, the Chemical Weapons Convention (CWC) was created. As of the end of 2015, 192 countries had agreed to follow the CWC. According to the Organization for the Prohibition of Chemical Weapons, as of October 2015, 90% of the world's chemical weapons stockpiles had been destroyed.

The main types of agents used in chemical warfare are:

If we use chemicals (like Agent Orange or glyphosate) to destroy plants, sometimes human beings may be affected by side effects. But, we will not call it chemical warfare. Chemical warfare covers only direct attacks on human life.