Medication (also called medicine or pharmaceutical drugs) is the use of legal drugs to treat or cure an illness. Some drugs are freely sold. They are called over-the-counter (OTC) drugs. Other drugs are so powerful or dangerous that a doctor must give permission to use the drug. The note from the doctor is called a "prescription." These drugs are called prescription drugs, prescription medicines, or prescription only medicines (POM).

There are many different words used to describe important things about medications.

Dosage is how much medication needs to be taken to make the medication do what it is supposed to.[1]

Some dosages are based on age. For example, children often need less medication than adults. Others are based on body weight. Sometimes, normal dosages have to be changed if a person has certain medical problems, like kidney failure.

Many drugs have more than one action. For example, acetaminophen is an analgesic (it kills pain) and an antipyretic (it makes fevers go away).[4]

Many drugs have more than one indication. For example, acetaminophen's indications include pain and fever.[4]

A contraindication is a reason why a medication should not be given.

Side effects and adverse effects

A person takes a medication because they want it to do certain things. When the medication also does other things that the person did not want, these are called side effects. For example, acetaminophen can cause nausea.[4] This is a side effect of acetaminophen.

All medications have a few different names.

When a medication is first discovered, it is given a chemical name. This name describes the atoms or molecules in the medication. Usually, only scientists use this name.[6]

For example, the chemical names for acetaminophen are N-acetyl-para-aminophenol and para-acetyl-amino-phenol.

Every country has one generic (official) name for every medicine.[6] 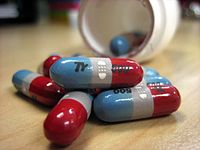 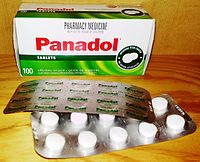 Each company that makes a drug gives that drug a brand name. No other company is allowed to use this name.[6]

Some medicines have unofficial abbreviations. For example, acetaminophen is sometimes abbreviated APAP. This comes from the drug's chemical name: N-Acetyl-Para-Amino-Phenol.

All the same medicine

No matter which of these names is used, they all describe the same medicine. For example, there is no difference between N-acetyl-para-aminophenol, acetaminophen, paracetamol, Tylenol, Panadol, and APAP.

How medications are given

There are many ways that medications can be given. These are called "routes of administration."

For most medications to work, they need to get into the bloodstream. The blood carries the medicine around the body and takes it where it is needed. The way a medication is given affects:

The most common way of giving medicine is by mouth. The medicine comes in a pill or liquid that a person swallows.[7]

Not every medication can be given by mouth. With some medicines, like insulin, the acid in the stomach will change the medicine or break it down so much that it will not work.[8] 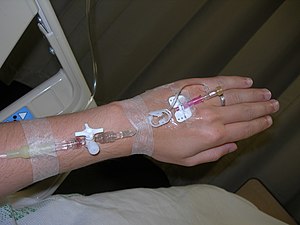 A person gets medicine through an IV in their hand

Some medicines can be given through a needle placed into a vein. This way of giving medicine is called intravenous (IV).[7]

However, IV medications will not last as long as medications given by mouth. This is because the body starts metabolizing medications (breaking them down so the body can get rid of them) as soon as the medicine gets into the bloodstream.[8]

Not every medicine can be given intravenously.

Some medicines can be given through a needle placed into a big muscle, like the muscles in the upper arm, thigh, or buttocks. This way of giving medicine is called intramuscular (IM).[7]

Also, not all of the medicine gets into the bloodstream because some of it gets caught in the soft tissue in the muscle and never reaches the blood vessels.[8]

Some special medicines can be breathed in. This way of giving medicines is called by inhalation (sometimes abbreviated INH).[7] This can be especially helpful for lung problems like asthma. Since the medicine is breathed right into the lungs, it can start working on the lungs right away.[9]

There are many other routes of administration. For example:[7]

There are many other routes of administration.[7]

Many medicines can be given more than one way. For example, acetaminophen can be given by mouth, into the rectum, or into a vein.[10]