Close-up of a human's nose 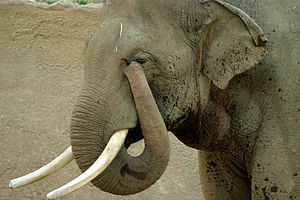 A nose is a body part which allows animals to smell things. The nose also helps animals breathe. It has parts that make it work and send messages to the brain. The nose's parts include smell receptors and nerve connectors to receptors. In humans, the nose is on the front of the face. The power of the nose varies for animals. For example, dogs have a stronger sense of smell than human. It is part of the respiratory system which is the system in animals that help them to breathe. Your nose is very powerful and can remember up to 50,000 different scents.

The nose is important to health. It filters the air breathed in, removing dust, germs, and irritants. It warms and moistens the air to keep the lungs and tubes that lead to them from drying out. The nose also contains nerve cells that help the sense of smell. When there is a problem with the nose, the whole body can suffer. For example, the stuffy nose of the common cold can make it hard to breathe, sleep, or get comfortable.

Many problems besides the common cold can affect the nose. They include