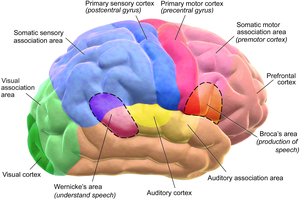 Functional areas of the human brain.

The brain is the part of the body which lets animals make sense of things. It gets input from sense organs, and changes behavior in response to this information. In humans, the brain also controls our use of language, and is capable of abstract thought.[1] The brain is the main control centre of the whole body.[2] The brain is made up of special cells called nerves, which are connected with each other and with other nerves in our body. In all animals the delicate brain is protected in some way. In ourselves, and all vertebrates, it is protected by the bones of the skull.

The brain does the thinking, learning, and feeling for the body. For humans, it is the source of consciousness.[3] The brain also controls basic autonomic body actions, like breathing, digestion, heartbeat, that happen automatically. These activities, and much else, are governed by unconscious functions of the brain and nervous system. All the information about the world gathered by our senses is sent through nerves into the brain, allowing us to see, hear, smell, taste and feel things. The brain processes this information, and we experience it as pictures, sounds, and so on. The brain also uses nerves to tell the body what to do, for example by telling muscles to move or our heart to beat faster.

This is generally true but some activity is caused by the spinal cord directly, for example, reflex actions do not involve the brain. In lower animals, a good deal is done without their brain being involved.

All vertebrates have brains and, over time, their brains have evolved to become more complex.[4] Some simple animals, however, like sponges, do not have anything like a brain. Segmented invertebrates have ganglions in each segment, and a ring of nervous tissue around the alimentary canal at the front. This acts to bring sense data from the front into play with the movement of the body.

In mammals, the brain is made of three main parts: the cerebrum, the cerebellum and the brainstem. The surface of the cerebrum is the cerebral cortex, which all vertebrates have. Mammals also have an extra layer, the neocortex. This is the key to the behaviour which is typical of mammals, especially humans.[5]

The cortex has sensory, motor, and association areas. The sensory areas are the areas that receive and process information from the senses. The motor areas control voluntary movements, especially fine movements performed by the hand. The right half of the motor area controls the left side of the body, and vice versa. Association areas produce a meaningful experience of the world, and supports abstract thinking and language. This enables us to interact effectively. Most connections are from one area of the cortex to another, rather than to subcortical areas; The figure may be as high as 99%.[6]

The cerebellum coordinates muscles so they work together.[7] It is also the centre of maintaining position and balance, a vital part of movement helping with simple motor skills.

The brain stem is at the back of the brain (actually underneath it in humans). It joins the rest of the brain with the spinal cord. It has lots of different parts that control different jobs in the body: for instance, the brain stem controls breathing, heartbeat, sneezing, eye blinking, and swallowing. Body temperature and hunger are also controlled by parts of the brain stem.

The volume of the human brain (relative to the size of the whole body) is very large, compared to that of most other animals. The human brain also has a very large surface (called cortex) for its size, which is possible because it is very wrinkled. If the human cortex were flattened, it would be close to a square meter in area. Some other animals also have very wrinkled brains, such as dolphins and elephants. Here is a rule of thumb: the larger an animal is, the larger its brain will be.[1]p15 Even allowing for that, the human brain, and in particular the neocortex, is very large. We know it increased in size four-fold over the last several million years of evolution.[1]p79 There are ideas about why this happened, but no-one is quite sure. Most theories suggest complex social activity and the evolution of language would make a larger brain advantageous.[1]p80[8] As an additional note, Einstein's brain weighed only 1,230 grams, which is less than the average adult male brain (about 1,400 grams).[9] The detailed organisation of a brain obviously matters, but in ways which are not understood at present.

A human brain accounts for about 2% of the body's weight, but it uses about 20% of its energy. It has about 50–100 billion nerve cells (also called neurons), and roughly the same number of support cells, called glia. The job of neurons is to receive and send information to and from the rest of the body, while glia provide nutrients and guide blood flow to the neurons, allowing them to do their job. Each nerve cell has contact with as many as 10,000 other nerve cells through connections called synapses.

Neural signaling in the human brain. Small electrical charges go from one neuron to the next