Pupae (brown examples are older than the white ones) 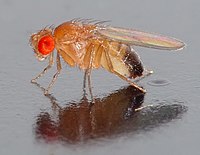 Drosophila is a genus of small flies, belonging to the family Drosophilidae, whose members are often called "fruit flies".

There are many species in this genus. Some do prefer places where there is rotting fruit. The adults may feed on nectar, and may lay their eggs on or near decaying fruit. The details differ greatly from species to species. The largest number of species is in the Hawaiian Islands.

One species of Drosophila in particular, D. melanogaster, has been heavily used in research in genetics and is a common model organism in developmental biology. The genus has more than 1,500 species,[1] and has varied appearance, behaviour, and breeding habitats.

Drosophila species are found all around the world, with more species in the tropical regions. Drosophila made their way to the Hawaiian Islands and radiated into over 800 species.[2] They can be found in deserts, tropical rainforest, cities, swamps, and alpine zones. Some northern species hibernate. Most species breed in various kinds of decaying plant and fungal material, including fruit, bark, slime fluxes, flowers, and mushrooms. The larvae of at least one species, D. suzukii, can also feed in fresh fruit and can sometimes be a pest.[3]

The courtship behavior of Drosophila melanogaster has also been assessed for sex-related genes, which have been implicated in courtship behavior in both the male and female. Recent experiments explore the role of fruitless (fru) and doublesex (dsx), a group of sex-behaviour linked genes.[4]

Males of this genus are known to have the longest sperm cells of any organism on Earth.[5] One species, Drosophila bifurca, has sperm 58 mm (2.3 in) long.[5][6][7] The cells are mostly tail, and are delivered to the females in tangled coils. Those Drosophila species with very long sperms make relatively few sperm cells.[8] D. melanogaster sperm cells are a more modest 1.8 mm long, although this is still about 300 times longer than a human sperm.

Several species in the D. melanogaster species group are known to mate by traumatic insemination, in which the male pierces the female's abdomen with his penis and injects his sperm through the wound into her abdominal cavity (haemocoel).[9][10]

Drosophila vary widely in their reproductive capacity. Those such as D. melanogaster that breed in large, scarce resources have ovaries that mature 10–20 eggs at a time, and can be laid together in one place. Others, which breed in common but less nutritious places (such as leaves), may only lay one egg each day.

The eggs have one or more respiratory filaments near the front end; the tips of these extend above the surface and allow oxygen to reach the embryo. Larvae feed not on vegetable matter but on the yeasts and microorganisms present on the decaying surface of leaves or fruits. Development time varies widely between species (between seven and more than 60 days) and depends on factors such as temperature, breeding substrate, and crowding.

Drosophila has a number of close relatives, and some may actually be within its genus.

These are just examples. "The Hawaiian Drosophilidae are monophyletic".[12]