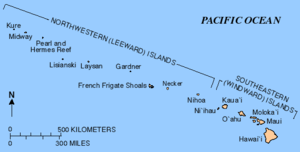 Map of the Hawaiian Islands, a chain of islands that stretches 2,400 km (1500 miles) in a northwesterly direction from the southern tip of the Island of Hawaii.

From west to east, Hawaii is made up of the following Hawaiian Islands: