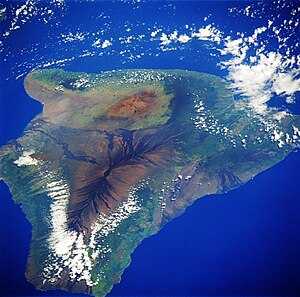 The Island of Hawaiʻi is the largest of the U.S. Hawaiian Islands, and the southern. Called locally the "Big Island," its area is 4,038 sq. miles (10 458 square kilometers). The widest part of the island is 93 miles (150 km) across. The Big Island makes up more than half (~62%) of the total land area of the State of Hawaii and is governed by the County of Hawaii.

The island is built from seven separate shield volcanos that erupted more or less one at a time, one partly covering the other. The later volcanoes mostly buried two of the earlier ones. These are (from oldest to youngest): Kohala (extinct), Ninole (extinct, mostly buried), Mauna Kea (dormant), Hualalai (dormant), Mauna Loa (active), Kulani (extinct, mostly buried), and Kilauea (very active). The volcanos, and the islands, were the result of the Pacific oceanic tectonic plate moving over a hotspot. There lava from the Earth's lower mantle or upper core is close to the surface.

The largest city on the island is Hilo. Hilo is filled with historic buildings, interesting shops, parks and has a constant stream of performances, festivals and events. It is on the rainy east side of the island. The city of Kailua-Kona is on the dry west side of Hawaii, and is popular with tourists.