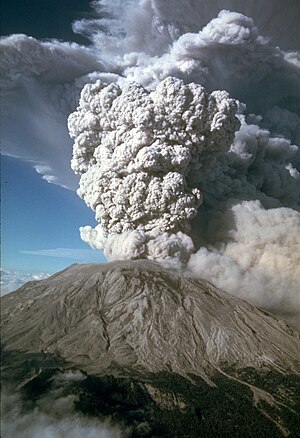 List of active volcanoes includes volcanoes which are erupting, or have erupted in modern times.[1] Many volcanos have erupted dozens of times in the past few thousand years, but are not erupting at this moment. Some scientists consider a volcano active if it has erupted in the holocene (historic times) period.[2]

Most volcanoes live many thousands of years and erupt many times. However, most do not erupt even once in a human lifespan. Signs of unrest such as unusual earthquake activity or significant new gas emissions are signs that a volcano is active. An example of an active volcano is Mount St. Helens in the United States (US).[3]

There are more than 1,500 volcanoes that could be active today.[4] An estimated 500 million people live near active volcanoes.[5]

Planet Venus has more volcanoes than Earth. Some may be active.

The Pacific "Ring of Fire" is an arc around the Pacific Ocean where there are 400+ volcanoes.[7]

Active volcanos of East Africa are shown as red triangles

Other regions of active volcanoes include the Mediterranean Sea, the Atlantic Ocean and other places.