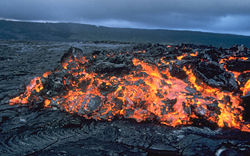 Kilauea is an active volcano in the Hawaiian Islands. It is a shield volcano. The volcano is 1,277 meters high.[1] Kilauea is a large lake of lava. The crater of Kilauea is named Pu'u'O'o. The first eruption of Kilauea is estimated as 300 to 600 thousand years ago. Its first recorded eruptions were in 1823. Its most recent eruption was 3 January 1983. It is still erupting now. The Hawaiian name Kilauea means "spewing" or "much spreading". It refers to the constant flow of lava. Kilauea lies on the curve of volcanoes on the island of Hawaii that includes Mauna Loa and Kohala. The volcano of Kilauea is one of the youngest and also is said to be the home of an ancient volcano goddess Pele. The oldest dated rocks are said to be about 23,000 years old. It has its own magma plumbing under the Earth that goes down under the Earths crust by 60 km. Kilauea has a basalt-based lava rock type. Kilauea was formed on a volcanic hot-spot.