Mt. Vesuvius as seen from the ruins of Pompeii, which was destroyed when it erupted in AD 79. The active cone is the high peak on the left side. The smaller one on the right is part of the Somma caldera wall. 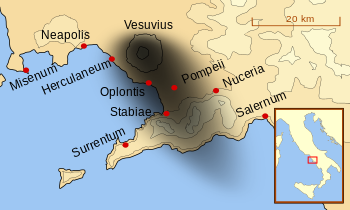 The eruption of Vesuvius in 79 AD. This shows the many towns and cities nearby. The ash cold cloud from Vesuvius is shown in black.

Mount Vesuvius (Italian: Monte Vesuvio, Latin: Mons Vesuvius) is a stratovolcano on the Gulf of Naples, Italy. It is about 9 kilometres (5.6 mi) east of Naples. It is the only volcano on the mainland of Europe that erupted in the last 100 years. The last major eruption was in 1944. Two other important active volcanos in Italy are on islands. They are Etna and Stromboli.

Mount Vesuvius is best known for its eruption in AD 79 which destroyed the Roman cities of Pompeii and Herculaneum.[1] They were never built again. The towns were buried in ash so completely that later people who lived there forgot about them until they were accidentally discovered in the late 18th century.

The eruption also changed the way the Sarno River flowed, and raised the sea beach. Because of this, Pompeii was not on the river nor next to the coast anymore. Mount Vesuvius was also greatly changed. Many of the plants there died, and the top of the mountain looked different because of the strong eruption.

Vesuvius has a long tradition of history and literature. A serpent (snake) called "Vesuvius" has been used in frescos of many lararia (household temples) from Pompeii. In Capua, the words "IOVI VESVVIO" (Jupiter Vesuvius) show that he was worshipped as a power of Jupiter.[3][4]

The historian Diodorus Siculus said that there was a story that Hercules once passed through the country of Cumae when he was going to Sicily. There, he found a place called "the Phlegraean Plain" (phlegraion pedion, "plain of fire"). It said that it was "from a hill which anciently (from a long time ago) vomited out fire ... now called Vesuvius."[5] Giant "sons of the Earth" lived inside it. With the help of the gods, he helped the people there and went on. An ode by Martial in AD 88 suggests that Venus and Hercules were worshipped in the place that was destroyed by the eruption in AD 79.[6]

The volcano was often called "Vesuvius" in the late Roman Republic and the early Roman Empire. It was also called Vesaevus, Vesevus, Vesbius, and Vesvius.[7] Writers in ancient Greek called it "Οὐεσούιον" or "Οὐεσούιος". Many scholars think the word Vesuvius was related to the Greek word "οὔ" (not) and σβέννυμι (I quench), so that it would mean "unquenchable".[7][8] Others think it might come from ἕω "hurl" and βίη "violence", "hurling violence".[9] 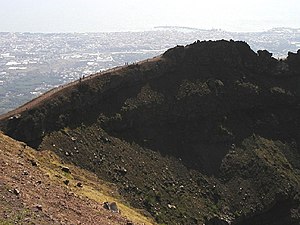 A view of the crater wall of Vesuvius, with the city of Torre del Greco in the background

Vesuvius has a large cone (Gran Cono) which is partly surrounded by the top of a caldera which was made when an earlier and much higher structure called Monte Somma collapsed.[10] The Gran Cono was made during the eruption of AD 79. For this reason, the volcano is also called Somma-Vesuvius or Somma-Vesuvio.

Before Mount Vesuvius exploded in 84 B.C.E people who lived nearby did not even know that it was a volcano, because it had not erupted for 600 years.[11] At about 1 PM, on August 24, AD 79, Mount Vesuvius erupted violently. It showered ash and pumice on the town of Pompeii, which was 5 miles away.[11]

Today, people think the eruption of 79 AD lasted more than 19 hours. It was noticed by Pliny the Younger who described the mushroom cloud from the volcano as being in the shape of umbrella pine, a tree commonly found in the region. Pliny the Younger was the only person to write the story down.

There were many ways that people died. One was that the smoke that they breathed in was deadly because it dried in their lungs and formed glass. They also were buried by powdery ash from the volcano, which was all over them. Over time this ash turned to a sort of rock, protecting the bodies and the city from the weather and from robbers.

Vesuvius erupted 50 more times after the eruption in 79 AD. Vesuvius was named a national park in 1995.