Naples with Mount Vesuvius in the background. 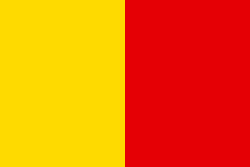 Naples is a southern Italian city with a port. It faces the Mediterranean Sea and is near Mount Vesuvius. Its name in Italian is Napoli which came from its Greek name Neapolis, meaning new city. It has a population of about 1 million.[1] About 3 million live in the area around Naples (including Naples itself).

There is one airport in the city, Naples International Airport at Capodichino.

Ancient Greeks settled Naples in the 6th Century B.C. There were so many Greeks there, the Romans called it Magna Graecia, which means "Greater Greece."[2] Later the Romans conquered southern Italy and took Naples. When the Roman Empire fell to invaders in the west, Naples came under the rule of the Byzantine Empire, the Greek-speaking Eastern Roman Empire.

Naples became independent later and but was combined with the Kingdom of Sicily during the Middle Ages. By 1500 it was ruled by Aragón, which was a kingdom in eastern Spain. Later Naples became part of Spain when Aragon and the other kingdom in Spain called Castile became one country. Naples was part of this Kingdom of Spain until the Austrian Empire got it in the War of the Spanish Succession in 1714.

In the 19th century it was the capital of the Kingdom of the Two Sicilies. The Duchy of Savoy, or kingdom of Sardinia-Piedmont, conquered Naples in 1861. That kingdom became the Kingdom of Italy. Naples was heavily bombed when Italy fought in World War Two and British/American armies tried to capture it.

Today Naples is the capital of Campania and the largest city in southern Italy.

The average temperature in the summer is 24°C. In the winter, the average can be as low as 8°C. There is usually around 40 inches of rain in the city every year.

Naples is Italy's fourth-largest economy, with a 2011 GDP of US$83.6 billion.[4] The Port of Naples is one of the most important and busy ports in the Mediterranean. The city, however, still has a lot of organized crime and political corruption.[5]

Naples is a popular city for tourists. It was rated the 166th-most-visited city in the world in 2008.[6]

Recently, more people work in the service industry than in agriculture. In 2003, 31% of people worked in public services, 18% in manufacturing, 14% in commerce, 10% in construction, 8% in transportation, 7% in financial services, 5% in agriculture, 4% in the hotel business and 3% work in other fields.[7]