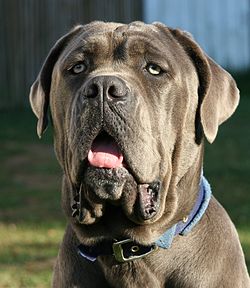 The Neapolitan Mastiff or Italian Mastiff, (Italian: Mastino Napoletano) is a large, ancient dog breed. This large breed is often used as a guard dog and family protector. Despite their looks, they are a big gentle dog with family and friends.[1] They can be trained as guard dogs to protect people or property.[1] Neapolitan Mastiffs need a lot of daily exercise.[1] They are indirectly descended from the Tibetan Mastiff, one of the oldest dog breeds.[1]. The Neapolitan Mastiff descends from the traditional guard dogs of central Italy, that were direct descendants of the "Canis Pugnax" of the legions of ancient Rome. It was recognised as a breed by the Ente Nazionale della Cinofilia Italiana in 1949.

This breed is closely related to the Cane Corso.

The breed of "Cane Corso" is closely related to the "Neapolitan Mastiff"; they are practically cousins and they share their genetic heritage. Both of these dog breeds came to life when the Roman empire attacked Greek islands and encountered the Molosser dog breeds. They decided to take some of these dogs back to the Roman empire and breed them with the native dog breeds. The first dogs that were created in Roman times from the original Molossers were called “Canis Pugnax” - the Roman dogs of war....These dogs were famous Roman war dogs. They were trained for a specific purpose on the battlefield and their imposing looks stroke fear in their enemies. They used to be even bigger and they had special armor made especially for them so they could stay alive as long as possible and be shielded from arrows and spikes. The Romans trained these dogs to charge their enemies while carrying flamings buckets of oil on their side. There are many ancient pictures and statues of these dogs in armor and depicted as guardians and companions of Roman soldiers.WDF[2]

The Neapolitan Mastiff derives from the traditional "Catch dog" and guard dogs of central Italy (but the distant origin is the "canis pugnax" [3]of the Roman legions).Selection of the breed was begun in 1947 by Piero Scanziani, who had seen one at an exhibition in Naples in 1946. He drew up the first "breed standard" for the race, which in 1949 was officially recognised by the Ente Nazionale della Cinofilia Italiana. It received full acceptance from the Fédération Cynologique Internationale in 1956.