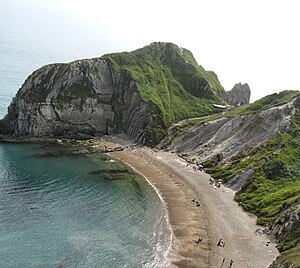 A sand and shingle beach 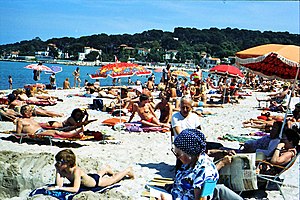 A tourist beach in France. 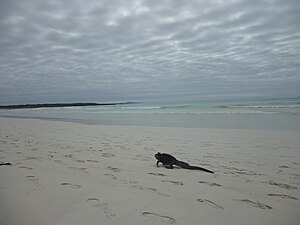 A beach is a landform along the coast of an ocean, sea, lake, or river. It usually consists of loose particles, such as sand, gravel, shingle, or pebbles. The particles of a beach are sometimes biological in origin, such as mollusc shells or bits of coral and sometimes bits of igneous rock, but the most common mineral in beaches is quartz.

Beaches are natural landing and launching places for boats, and landing craft are specially made for beaches.

People often use beaches for recreation. They swim, bask in the sun, or just relax. The most popular beaches have fine white or light-colored sand and warm water to swim in. Beaches are also used for diving or for seeing marine life.

Taking holidays on the beach is something of a British cultural export. Early railways in the 19th century took people to places they had never seen before. This tourism was made possible by the industrial revolution. Whole seaside resort towns grew to support visitors, where before there were just villages. Vacations at the sea became common all over the world.[1]

Beaches are never static. They are always being built up or eroded, more quickly than other landforms. Over time the boundary between the land and the sea changes. New Romney, a small town in Kent, is one of the Cinque Ports, a mile from the sea. In Henry VIII's time it was a port on the south coast of England. The growth of Dungeness has cut it off from the sea. Dungeness is a huge shingle beach.