Magma is called lava when it reaches the surface. 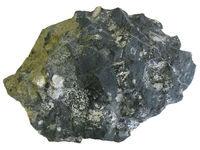 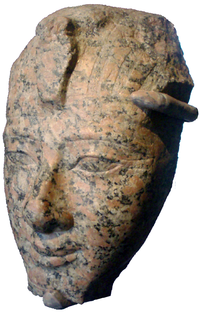 Igneous rock is one of the three main rock types, the others being sedimentary and metamorphic rock.

Igneous rocks are rocks formed from molten magma. The material is made liquid by the heat inside the Earth's mantle.

When magma comes out onto the surface of the Earth, it is called lava. Lava cools down to form rocks such as tuff and basalt. Intrusive rocks are made when the magma slowly cools to form rocks under the surface. Granite is one of these.

The upper 16 km (10 miles) of the Earth's crust is composed of about 95% igneous rocks with only a thin, widespread covering of sedimentary and metamorphic rocks.[1]

Igneous rocks are geologically important because:

Magma is a complex high-temperature fluid substance. Temperatures of most magmas are in the range 700 °C to 1300 °C. Magma can get forced into adjacent rocks (intrusion or plutonic), or forced out to the surface (extrusion or volcanic) as lava, or blown out in exposions which include rock pieces (tephra).

Magma is made up of atoms and molecules of melted minerals. When magma cools the atoms and molecules rearrange to form mineral grains. Rock forms when mineral grains (often crystals) grow together. Granite, diorite, gabbro and basalt are a few types of igneous rock. Quartz is one of the chief minerals produced by igneous action; it is made of silica (SiO2), the most common molecule in igneous minerals. Some examples of igneous volcanic rock are pumice, obsidian (volcanic glass), and scoria and much more.

Most of the minerals that make up igneous rock are of these types:[2]p12

Igneous rocks can be classified according to their chemistry. The main types are:

The first six minerals in the list are silicates. Oxides are mostly of iron.