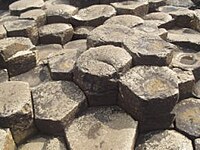 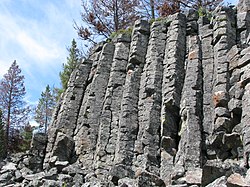 Basalt is a common gray to black extrusive volcanic rock. It is usually fine-grained because of its rapid cooling of lava on the Earth's surface.

Unweathered basalt is black or grey. Basalt blocks are often used for roads and pavements (sidewalks). It is extremely hard-wearing.

On Earth, most basalt magmas have formed by melting of the mantle. Basalt has also formed on Earth's Moon, Mars, Venus, and even on the asteroid Vesta.

The crustal portions of oceanic tectonic plates are composed mostly of basalt, produced from upwelling mantle below mid-ocean ridges.

Basalt can be made into fiber. Basalt fiber is often used as a safe replacement for asbestos.