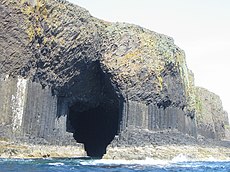 Fingal's Cave is a sea cave on the uninhabited island of Staffa, in the Inner Hebrides of Scotland, part of a National Nature Reserve owned by the National Trust for Scotland.[1] It is formed entirely from hexagonally jointed basalt columns. These are part of the same ancient lava flow as the Giant's Causeway in Northern Ireland and those of nearby Ulva.

In both cases, the cooling surface of the mass of hot lava cracked in a hexagonal pattern in a similar way to drying mud cracking as it shrinks. These cracks slowly extended down into the mass of lava as it cooled and shrank to form the columns, which were later exposed by erosion.[2]

The breakup of Pangaea separated the two parts of the same rock formation.

The size of the cave, and its naturally arched roof,[3] and the eerie sounds produced by the echoes of waves, give it the atmosphere of a natural cathedral. The cave's Gaelic name, Uamh-Binn, means "cave of melody."[4]

In art and literature 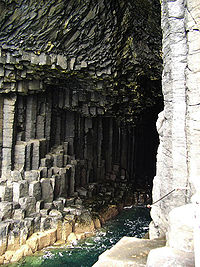