An arch is an opening in a building that is curved on top to distribute the weight. The curved part can be round, like part of a circle, or pointed, like two parts of circles next to each other. Arches are often used where buildings are made of many small stones or bricks. The stone at the very top of the arch, called the keystone, keeps the rest of the arch stones from falling down. Arches can go over doorways and windows. Many bridges are arch bridges including ones made of steel. A series of arches is an arcade.

Arches can be found in nature. These natural arches form through the erosion of cliffs.[1]

Arches can have many forms, but they can be sorted into three categories: circular, pointed and parabolic. 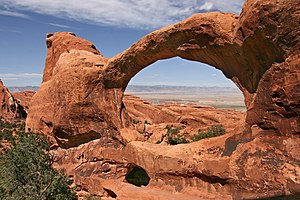