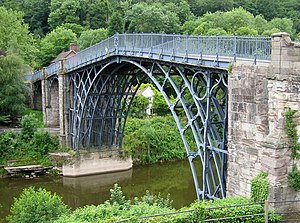 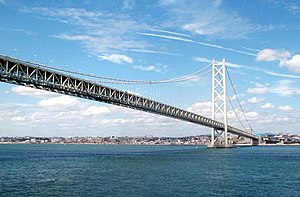 The longest suspension bridge in the world connects Honshu to Shikoku, Japan.
For other uses, see Bridge (disambiguation).

A bridge is a structure to cross an open space or gap. Bridges are mostly made for crossing rivers, valleys, or roads. Nowadays most big bridges are made to carry vehicles but people have also walked across bridges for thousands of years. Bridges called highway overpasses carry a road over another road.

Military bridges are portable, so that they may be easily moved to where they are needed. This makes them much more complex than most civilian bridges.

The first man-made bridges were probably made from cut wood or stones. Some stone bridges have lasted thousands of years. In recent centuries large bridges are made mostly of steel. They do not last as long. Many bridges are in a state of disrepair.[1]

There are five major structural types of bridges: