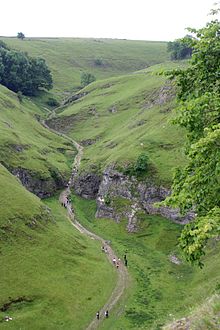 A valley is a type of landform. A valley is a lower part in the land, between two higher parts which might be hills or mountains. Valleys often start as a downward fold between two upward folds in the surface of the Earth, and sometimes as a rift valley. A valley is made deeper by a stream of water or a river as it flows from the high land to the lower land, and into a lake or sea. Some valleys are made by glaciers which are slow-moving rivers of ice. When water or ice make a valley deeper or wider, this is called erosion. Wind can also make valleys larger by erosion.

A valley has a "head" where it begins in the mountains or hills, "sides" where it rises up on either side, a "floor" which is where the valley is most flat. Some valleys have an "entrance" where the valley opening can be seen between two hills or mountains or cliffs. A place where a valley is very narrow and has high walls is sometimes called a "gorge". (This word "gorge" is sometimes used to mean the "throat" on a human body).

Mountains and hills are made when the layers of rock and soil (called "strata") get folded. Fault block mountains may have rift valleys. There are valleys in mountain ranges, between the highest parts which are the "peaks". People who want to travel to the other side of the mountains usually go by the valleys. A valley that people use to travel through mountains or hills is called a mountain pass.

In country that has hills, but is not very steep, a river or stream runs more slowly. It makes a wider valley that often has some large bends as the river flows around the hills, always following the lowest way. Water running down from the hillsides often carries soil that spreads out across the valley, making flat land that is good for growing food crops and raising cattle and other animals. Many farms are in valleys that are in hilly land. Many towns are built on the sloping sides of valleys. Famous valleys of this type are the Loire Valley and the Lower Rhine Valley in Europe and the Thames Valley in England.

Some valleys are almost flat, like a large saucer. Valleys of this type often have a very large river with many "tributaries" (streams that are like branches) running through them. The tributaries carry water from the hills or mountains that may be far from the main river. After heavy rain, lots of water rushes into the main river so that it rises and floods over the flat floor of the valley. When the flood waters spread, they drop lots of soil which has washed down from the hills. The soil that drops on the valley floor makes a flat flood plain. Valleys of this type are very useful for growing food crops. The widest valleys in the world are like this. Famous valleys of this type are the Mississippi-Missouri Basin in North America, the Amazon Basin in South America, the Lower Danube in Europe, the Ganges River Valley in India, the Nile River Flood Plain in Africa and the Darling River Basin in Australia.

Valleys made by glaciers

A glacier is like a frozen river. Many countries do not have any glaciers. A glacier starts in very high mountains where there is snow and ice all the year. The snow and ice starts to move down a valley that has been made by a fast-flowing stream. As the ice starts to slide down the mountainside, it does not flow around the rocks; it pushes the rocks out of the way. As a glacier moves, it picks up more ice and gets bigger and bigger. A big glacier cuts through the soil and softer rock of the valley and piles up the rocks on either side, or pushes them in front of it. When a big glacier melts, it leaves a valley of a deep U-shape. Many valleys like this were made in the Ice Ages. In mountainous countries like Switzerland many people live in the valleys that were made by glaciers. Some of the deepest valleys in the world were made by glaciers. The fjords of Norway and "sounds" of New Zealand are where glaciers went into the sea.

A plateau is high land that is flat on top, or gently rolling, not pointed like mountains or rounded like hills. In hilly or mountainous country, the bands of a soil and rock are folded, but in a plateau the strata are in flat layers. The water that makes streams on the top of a plateau cuts down in wide valleys with sides that are steep cliffs and a bottom that is quite flat. Valleys like this are often deep and very narrow. Some valleys like this are very deep and wide. They are called "canyons". Famous valleys of this type are the Grand Canyon in the United States and the Megalong Valley in Australia.

Sometimes a valley has been formed in the hills near the coast of a country. Movement in the Earth's surface may cause the land to sink lower and become flooded by the sea. The shape of the valley can still be seen from the tops of the hills that stick out from the water. Some of the hills may become islands, and others become the shore of a bay. Sunken valleys often make good harbours. The east coast of Australia has many sunken valleys of which the most famous is Sydney Harbour.