Sydney Harbour (also called Port Jackson) is a natural harbour. It is on the East Coast of Australia in Sydney. It is also the location of the famous Sydney Opera House and the Sydney Harbour Bridge.

Before the arrival of European settlers, the area surrounding Sydney Harbour was home to a variety of aboriginal tribes, this included members of the Gadigal, Cammeraygal, Eora and Wanegal tribes. It is believed that the Gadigal people once lived in the area starting from the south side of Port Jackson (South Head, Watsons Bay), heading west in a semi circle cutting through Petersham. On the northern side of Sydney Harbour lived the Cammeraygal tribe. It was believed that the area on the southern side of the Parramatta River, just west of Petersham and through to Rose Hill, was owned by the Wanegal tribe. The Eora tribe lived on the southern side of Sydney Harbour, not far from where the First Fleet set up camp. 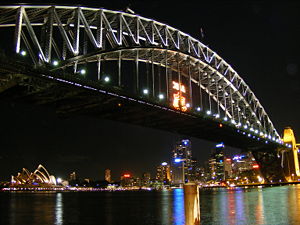 Lt James Cook was the first person to find Sydney Harbour, this was in 1770. Captain Cook did not go into the harbour, but sailed past the entrance (Sydney Heads) on his way north up the East Coast of Australia. This was shortly after he found and left Botany Bay (Kurnell Peninsula). Cook named it [Sydney Harbour] after Sir George Jackson.[1]

European settlement started on January 26, 1788, when Captain Arthur Phillip and the First Fleet arrived from England. Phillip brought 732 convicts (prisoners) and a small group of soldiers to start a penal colony. They landed at a small inlet which they called Sydney Cove. This was named after Lord Sydney who was the British government's Home Secretary.

There are lots of islands inside Sydney Harbour, this includes Shark Island, Clark Island, Fort Denison, Goat Island, Cockatoo Island, Spectacle Island, Snapper Island and Rodd Island. Some other former islands, including Bennelong Island, Garden Island and Berry Island have been connected to the mainland by bridge or by landfill.