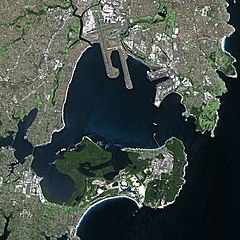 Botany Bay is a bay in Sydney, New South Wales. It is a few kilometres south of the Sydney central business district. The Cooks River and the Georges River are the two major tributaries that flow into the bay. Two runways of Sydney Airport extend into the bay.

On 29 April 1770, Botany Bay was the site of James Cook's first landing of HMS Endeavour on the continent of Australia. Later the British planned Botany Bay as the site for a penal colony. Out of these plans came the first European to live in Australia at Sydney Cove.

Aboriginal lived in this area dating back 5,000 years. The Aboriginal people of Sydney were known as the Eora.

Even though it is a busy port, there are many types of marine life. The area around its entrance is some of the best scuba diving in the Sydney area. The world's largest population of weedy sea dragon found was on the southern side.