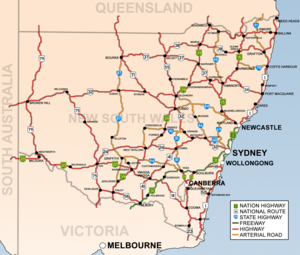 The name New South Wales came from the journal of Lieutenant James Cook (later Captain Cook), who sailed up the east coast of Australia in 1770. He thought that the land looked like the south coast of Wales. He named it "New Wales" but then changed the name in his journal to "New South Wales".

New South Wales was founded (begun) in 1788, by the British who set up a small colony which became known as Sydney Town, and grew into the city of Sydney. The British colony of New South Wales originally included more than half of the Australian mainland, as well as New Zealand, Lord Howe Island and Norfolk Island. During the 19th century large areas were separated to form the British colonies of Tasmania, South Australia, Victoria, Queensland and New Zealand.

The climate of this area ranges from cool temperate on the far south coast to subtropical near the Queensland border. This whole of the coastal strip is affected by the sea. For this reason, the temperatures are often cooled in the summer by sea breezes, and warmed in the winter by the currents along the coast. This makes the climate less hot and less cold than that of the inland regions. There is also more rain than there is farther inland where it is often very dry. For this reason, the three largest cities are all on the coast. The coast also has more intensive agriculture than the inland areas, with dairy cattle and vegetables crops, as well as sugar cane and bananas in the north.

The state is bordered on the north by Queensland, on the west by South Australia, and on the south by Victoria. Its coast faces the Tasman Sea. New South Wales contains two Federal Territories: the Australian Capital Territory (ACT), and the Jervis Bay Territory.

A portion of the eastern end of the Newcastle foreshore

Lookout over Wollongong from the Illawarra Escarpment