States and territories of Australia

States and territories of Australia

From 1926 to 1931, Central Australia existed as a separate territory between the 20th and 26th parallels of latitude, before being becoming a part of the Northern Territory again. 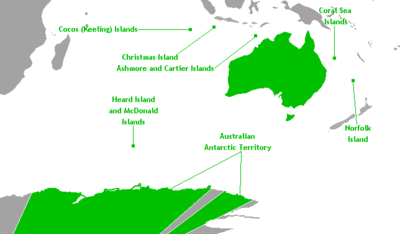 The states started as separate British colonies before Federation (in 1901). Their powers are protected by the Australian constitution. The territories are under the control of the Commonwealth government. The Australian Parliament has powers to create laws in the territories that it does not have in the states.

The head of government of each state is called the Premier. This person is chosen by the state's Governor. Normally the Governor will select as Premier whoever leads the lower house of the state Parliament. However, the Governor can chose someone else as Premier. The head of government of the self-governing mainland territories is called the Chief Minister. The Northern Territory's Chief Minister, is normally whoever controls the Legislative Assembly, is appointed by the Administrator.