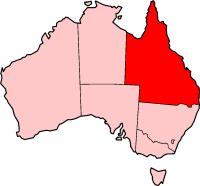 The flag of Queensland 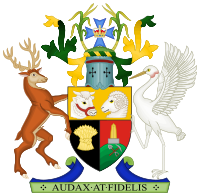 The coat of arms of Queensland

It occupies the north-east corner of Australia. The state has the Northern Territory to the west, South Australia to the south-west and New South Wales to the south. To the east, Queensland is bordered by the Coral Sea and Pacific Ocean. The capital city is Brisbane.

The area was first settled by Indigenous Australians and Torres Strait Islanders, who arrived between 40,000 and 65,000 years ago. Later, Queensland was made a British Crown Colony that was separated from New South Wales in 1859. The area that currently forms Brisbane was originally the Moreton Bay punishment colony, intended as a place for criminals with a repeated offence history who had offended while serving out their sentences in New South Wales. The state later encouraged free settlement, and today Queensland's economy is dominated by the agricultural, tourist and natural resource sectors.

The population is concentrated in the south-east corner, which includes the capital Brisbane, Ipswich, Logan City, and the Gold Coast and Sunshine Coast. Other major regional centres include Cairns, Townsville, Mackay, Rockhampton, Bundaberg, Toowoomba, and Mount Isa. Queensland is often nicknamed the Sunshine State, since it enjoys warm weather and a sizable portion of the state is in the tropics.