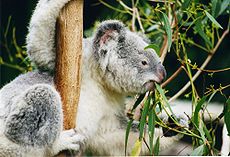 A sleeping Koala in a zoo.

Koalas (Phascolarctos cinereus) are herbivore marsupials that live in the eucalyptus forests of eastern Australia.[5] They are the only living species in the family Phascolarctidae.[6] They are related to the wombats.

Koalas are often called koala bears, because a koala looks like a small bear or teddy bear. However, it is not a bear, it is quite a different type of animal.[5][7]

Koalas have brownish-grey or silver-grey fur, and a big pink, dark red or/and black nose. They have sharp claws which help them to climb.[8]

Koalas are mostly active at night. They live in trees and are rarely found on the ground. Koalas have two unusual characteristics. They eat leaves of eucalyptus trees. Koalas do not drink often, they get most of their water from the eucalyptus leaves they eat. Eucalyptus leaves are poisonous, but koalas do not get poisoned. This is because they have certain bacteria in their digestive tract that can detoxify the poison in the leaves. Koalas, however, have to sleep long hours because eucalyptus leaves do not produce much energy and also because the digestive process takes a long time.

Koalas have a peculiar way of cooling themselves. Unlike humans who sweat and other animals, which either pant or lick their fur to stay cool, koalas reduce their body heat by hugging a tree. The temperature of the trunks of certain trees is up to 9 degrees Celsius lower than the air temperature. Koalas prefer to stay on these trees on a hot day even if they do not have the tastiest leaves.

Koalas live alone most of the time, but they have a social hierarchy with the other koalas who live near.

After a pregnancy of 35 days, the newly born koala is about a quarter of an inch long, and is born with no ears, eyes, or hair. It crawls into its mothers pouch on its own. After 12 months the young koala is old enough that it does not go into its mother's pouch or need milk anymore. The female koala can have another baby then. Young koalas usually leave their mothers when they are 18 months old, but if their mother does not have another baby they sometimes stay for up to three years. Koalas become mature when they are about two years old, but they often have their first baby after another two years.

The koala is not an endangered species, but it is a near vulnerable species. One reason is the loss of habitat, which means that koalas have less space to live. In some places there are very few koalas left. But there are also places, such as French Island (Victoria), with too many koalas that eat too much.[10] Because of this the eucalyptus trees and other animals are in danger. A study looking at koala numbers at 1800 sites for 20 years, shows that the number of koalas is falling. The study, by the Australian Koala Foundation, estimates that there are only about 50,000 koalas left.[10] there is over 500 types of gum trees in the world, however, koalas only eat 4-6 types that they prefer.

Many koalas are infected with Chlamydia. This is affecting the survival of the species. Koalas on French Island do not have the disease, and so groups of them are often moved to the mainland to repopulate some areas. The disease can cause blindness, pneumonia, urinary tract infections and reproductive tract infections.[11]