Trees around a lake.

The Trembling Aspen in its autumn colours

A tree is a tall plant with a trunk and branches made of wood. It can live for many years. The four main parts of a tree are the roots, the trunk, the branches, and the leaves.

The roots of a tree are usually under the ground. One case for which this is not true are the roots of the mangrove tree.[1] A single tree has many roots. The roots carry food and water from the ground through the trunk and branches to the leaves of the tree. They can also breathe in air.[1] Sometimes, roots are specialized into aerial roots, which can also provide support, as is the case with the Banyan tree.

The trunk is the main body of the tree. The trunk is covered with bark which protects it from damage. Branches grow from the trunk. They spread out so that the leaves can get more sunlight.

The leaves of a tree are green most of the time, but they can come in many colours, shapes and sizes. The leaves take in sunlight and use water and food from the roots to make the tree grow, and to reproduce.

Trees and shrubs take in water and carbon dioxide and give out oxygen with sunlight to form sugars. This is the opposite of what animals do in respiration. Plants also do some respiration using oxygen the way animals do. They need oxygen as well as carbon dioxide to live. 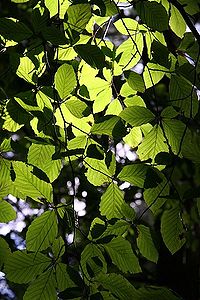 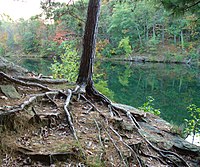 Tree roots anchor the structure and provide water and nutrients. The ground has eroded away around the roots of this young pine tree. 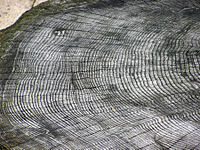 The dark lines between the centre and the bark are medullary rays, which allow nutrients to flow across the tree trunk.

The parts of a tree are the roots, trunk(s), branches, twigs and leaves. Tree stems are mainly made of support and transport tissues (xylem and phloem). Wood consists of xylem cells, and bark is made of phloem and other tissues external to the vascular cambium.

Growth of the trunk

As a tree grows, it may produce growth rings as new wood is laid down around the old wood.It may live to be a thousand years old. In areas with seasonal climate, wood produced at different times of the year may alternate light and dark rings. In temperate climates, and tropical climates with a single wet-dry season alternation, the growth rings are annual, each pair of light and dark rings being one year of growth. In areas with two wet and dry seasons each year, there may be two pairs of light and dark rings each year; and in some (mainly semi-desert regions with irregular rainfall), there may be a new growth ring with each rainfall.[2]

In tropical rainforest regions, with constant year-round climate, growth is continuous. Growth rings are not visible and there is no change in the wood texture. In species with annual rings, these rings can be counted to find the age of the tree. This way, wood taken from trees in the past can be dated, because the patterns of ring thickness are very distinctive. This is dendrochronology. Very few tropical trees can be accurately dated in this manner.

The roots of a tree are generally down in earth, providing anchorage for the parts above ground, and taking in water and nutrients from the soil. Most trees need help from a fungus for better uptake of nutriens: this is mycorrhiza. Most of a tree's biomass comes from carbon dioxide absorbed from the atmosphere (see photosynthesis). Above ground, the trunk gives height to the leaf-bearing branches, competing with other plant species for sunlight. In many trees, the order of the branches makes exposure of the leaves to sunlight better.

Not all trees have all the organs or parts as mentioned above. For example, most palm trees are not branched, the saguaro cactus of North America has no functional leaves, tree ferns do not produce bark, etc. Based on their general shape and size, all of these are nonetheless generally regarded as trees. Trees can vary very much. A plant form that is similar to a tree, but generally having smaller, multiple trunks and/or branches that arise near the ground, is called a shrub (or a bush). Even though that is true, no precise differentiation between shrubs and trees is possible. Given their small size, bonsai plants would not technically be 'trees', but one should not confuse reference to the form of a species with the size or shape of individual specimens. A spruce seedling does not fit the definition of a tree, but all spruces are trees.

A tree is a plant form that can be found in many different orders and families of plants. Trees show many growth forms, leaf type and shape, bark traits and organs.

The tree form has changed separately in classes of plants that are not related, in response to similar problems (for the tree). With about 100,000 types of trees, the number of tree types in the whole world might be one fourth of all living plant types.[3] Most tree species grow in tropical parts of the world and many of these areas have not been surveyed yet by botanists (they study plants), making species difference and ranges not well understood.[4]

A small group of trees growing together is called a grove or copse, and a landscape covered by a dense growth of trees is called a forest. Several biotopes are defined largely by the trees that inhabit them; examples are rainforest and taiga (see ecozones). A landscape of trees scattered or spaced across grassland (usually grazed or burned over periodically) is called a savanna. A forest of great age is called old growth forest or ancient woodland (in the UK). A very young tree is called a sapling.

The tallest trees in Australia are all eucalypts, of which there are more than 700 species. The so-called 'Mountain ash'. with a slim, straight trunk, grows to over 300 feet.

The stoutest living single-trunk species in diameter is the African Baobab: 15.9 m (52 ft), Glencoe Baobab (measured near the ground), Limpopo Province, South Africa.[6] This tree split up in November 2009 and now the stoutest baobab could be Sunland Baobab (South Africa) with diameter 10.64 m and circumference of 33.4 m.

Some trees develop multiple trunks (whether from an individual tree or multiple trees) which grow together. The Sacred Fig is a notable example of this, forming additional 'trunks' by growing adventitious roots down from the branches, which then thicken up when the root reaches the ground to form new trunks; a single Sacred Fig tree can have hundreds of such trunks.

The life-span of trees is determined by growth rings. These can be seen if the tree is cut down or in cores taken from the edge to the center of the tree. Correct determination is only possible for trees which make growth rings, generally those which occur in seasonal climates. Trees in uniform non-seasonal tropical climates are always growing and do not have distinct growth rings. It is also only possible for trees which are solid to the center of the tree; many very old trees become hollow as the dead heartwood decays away. For some of these species, age estimates have been made on the basis of extrapolating current growth rates, but the results are usually little better than guesses or speculation.[7]

The verified oldest measured ages are:

Other species suspected of reaching exceptional age include European Yew Taxus baccata (probably over 2,000 years[10][11]) and Western Redcedar Thuja plicata. The oldest known European Yew is the Llangernyw Yew in the Churchyard of Llangernyw village in North Wales which is estimated to be between 4,000 and 5,000 years old.

Studies have shown that trees contribute as much as 27% of the appraised land value in certain markets.[12]