A renewable resource is a resource which can be used repeatedly and replaced naturally. Renewable energy almost never runs out, for example: solar energy is powered by heat from the sun and never runs out. Examples include oxygen, fresh water, solar energy and biomass. New resources may include goods or commodities such as paper and leather.

Gasoline, coal, natural gas, diesel, plastics are other fossil fuels are not renewable. They take millions of years to be made, and cannot be renewed in a human’s, or even a nation's lifetime. Ways have been developed to make biodegradable plastic and bio diesel and other fuels from renewable resources such as corn, sugar cane, soybeans and canola. 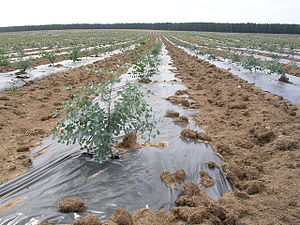 This is an example of a renewable resource.

Renewable resource harvesting and use typically do not produce pollution or contribute to global warming. The use of renewable resources and energy sources is increasing worldwide, with certain nations, such as Bhutan, and US states, such as California, beginning to rely entirely on renewable energy. From 2008 to 2012, the U.S. doubled renewable generation from wind, solar, and geothermal sources. America and Britain are now home to some of the largest wind and solar farms in the world.[1] There are also things called human resource where human’s waste is turned into energy. There are many other resources such as water power. Renewable resources are basically the opposite of non-renewable resources.